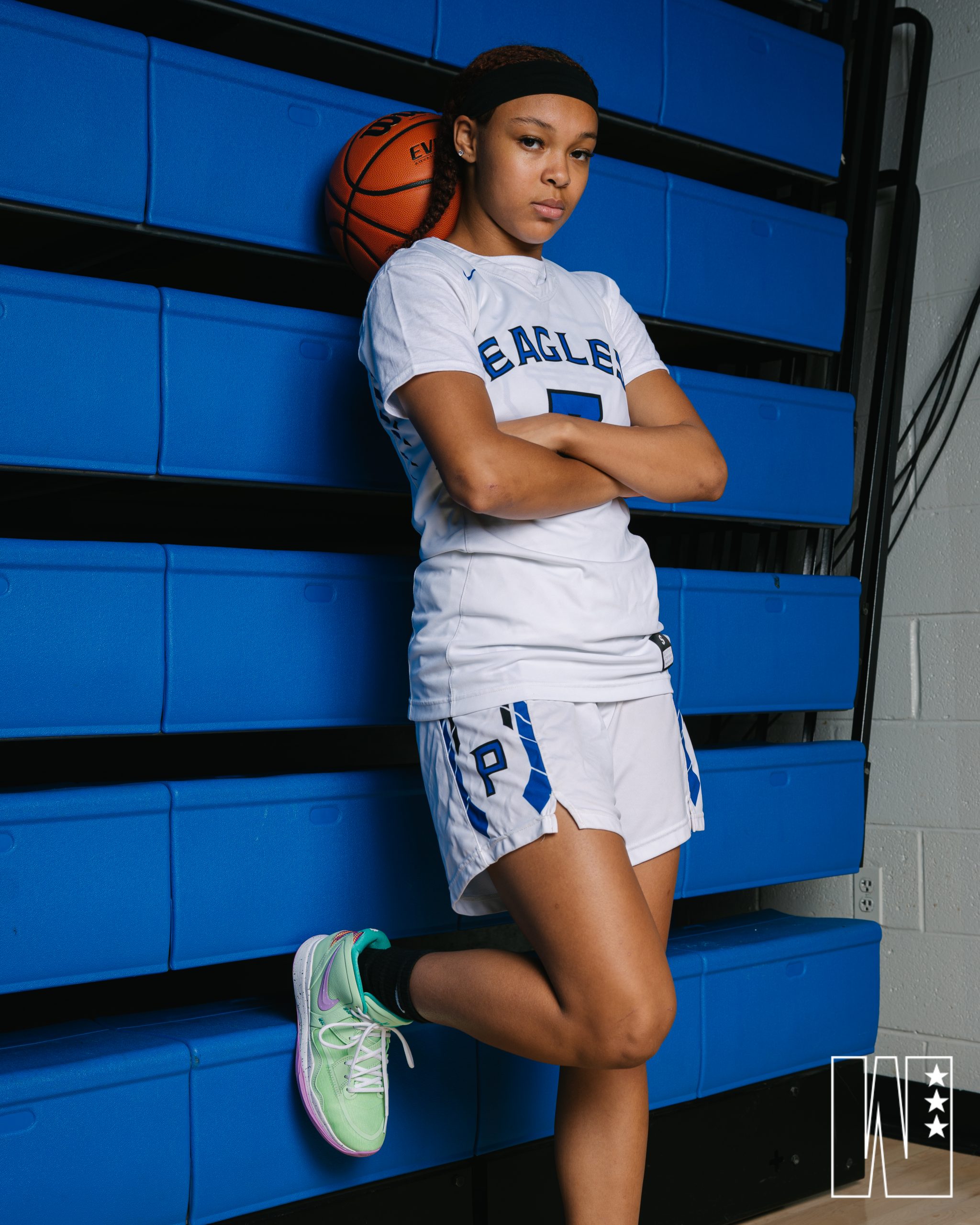 It was about midway through the first half of the girls game at the SLAM Summer Classic Vol. 4 when Rucker Park absolutely EXPLODED. We’re talking to the point where you heard it blocks away. What caused the commotion? Hannah Hidalgo hitting an Eastbay layup while getting fouled and picking up the and-1 at the free-throw line. The play of the weekend, hands down.

“When I hit it, I was just thinking, Wow, I can’t believe I just did that!” Hidalgo tells us a couple of weeks later. “I was in disbelief, and I don’t even remember what I was saying.”

Hitting a shot like that at the historic court takes skill and confidence, but most of all, swag—all things that describe the Jersey-made high school senior. Currently hooping at Paul VI HS in Haddonfield, Hidalgo is ranked fifth overall in the country in the Class of 2023 by ESPN.

Her game is shifty, quick and aggressive. She may not be the biggest guard, but if you’re a defender, you better brace yourself because she’ll come right at you. And speaking of defense real quick, did we mention the aforementioned play, Hannah’s showtime move at Rucker, came off her picking the pocket of an opposing player on the other end of the court?

“My favorite part of my game is my defense and how the energy that I bring on defense rubs off on my teammates,” she says confidently. “When I am getting stops and I’m getting loose balls and I’m diving on the floor, that really feeds off to my teammates.”

That dedication to defense is easy to see in her junior year stats, where she averaged 6.2 steals, along with 26.2 points and 6.1 rebounds per game.

Her energy comes from her family, all of which are part of the family business that is basketball. Her parents are both former hoopers, along with her brothers and cousins.

“Growing up, I was always quiet and to myself,” Hannah shares. “I would score a couple buckets and go home, but once I got to high school, I really started getting comfortable. That’s when I started to come out with that confidence. I think this came from my mom and God-given. My mom does all the talking and my cousin Dre [too].”

Hannah’s father, Orlando, was also one of her coaches growing up and most recently became her head coach at Paul VI last year. Orlando had been coaching the Team Flight AAU program, which included current New York Knick Cam Reddish, but he was hoping to see his daughter’s program have more success. After a year on staff at Paul VI, he was asked to take the head coaching position and has since helped the school to a 24-4 record and a trip to the South Jersey, Non-Public A final.

“My dad knows what he’s talking about, so it’s been great,” Hannah says. “It’s good during games, because it’s easy to come in and speak up if I see something on the court. I could always say, Hey, I see this, and we have to switch this up.”

While she may be quiet off the court, Hidalgo is a leader on it, talking on defense, setting up plays on offense and hyping up her teammates.

It’s that energy she hopes to bring to a college campus near you in 2023. As she steps into her senior year, the recruitment process has been ramping up. In August, she announced her top schools for consideration: Michigan, Notre Dame, Duke, Stanford, Ohio State and UCF.

“I want to add whatever defense they need. I want to bring something like energy on the defensive side that a school may not have. I want to be a leader and be vocal. I want to be a program champion and bring my team to a championship.”

Listen to the WSLAM ‘Get With It’ podcast featuring the Notre Dame commit.

The post Hannah Hidalgo is Ready to Bring Her Dynamic Game to Notre Dame appeared first on SLAM.