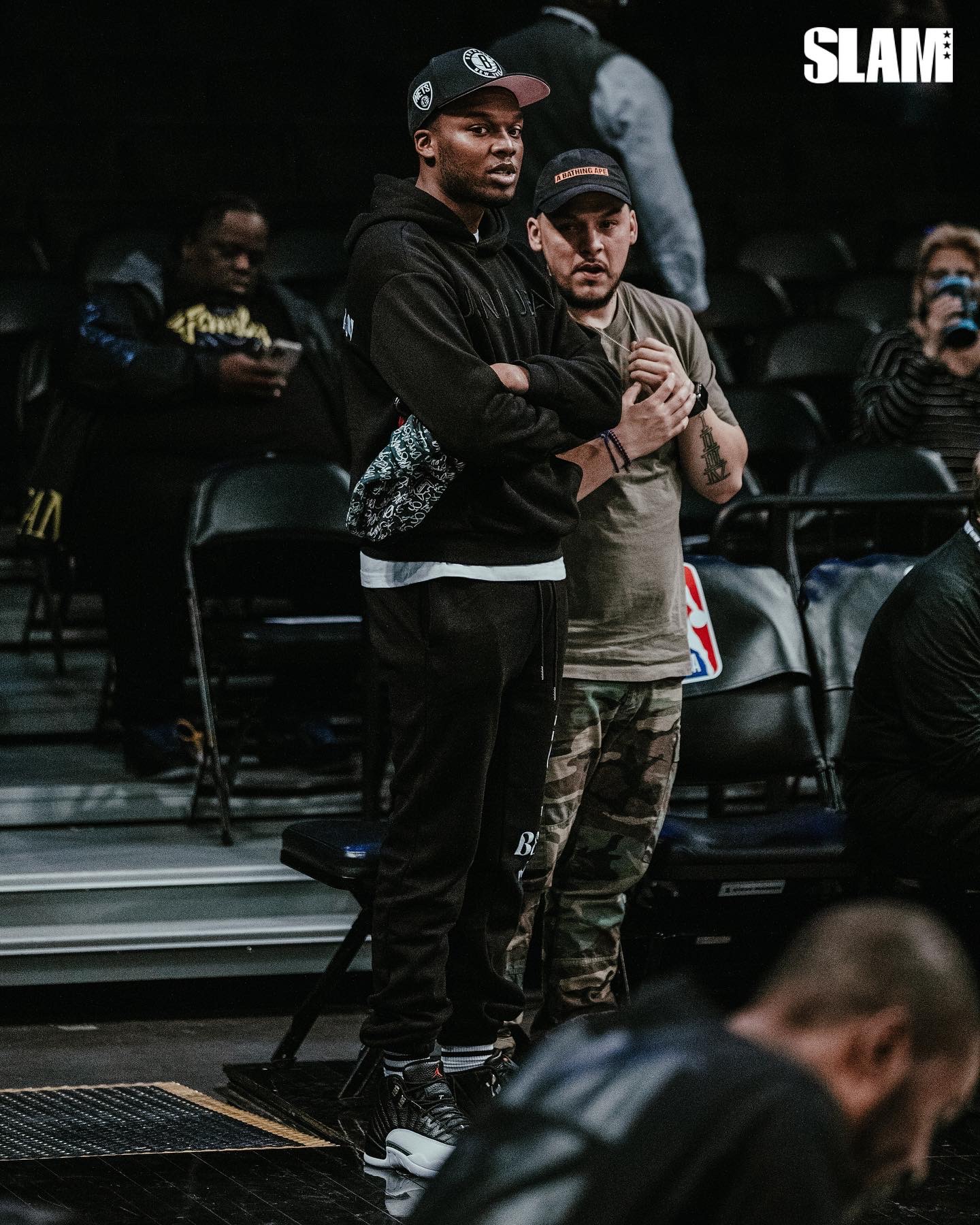 When the dwindling light of a basketball player’s ‘hoop dreams’ slowly starts to burn out, many don’t know where to turn to next. However, for Philadelphia-raised stylist and fashion guru Taron Barnes, his decision was easy after not getting the contract offers he was hoping for following a brief stint playing in Spain.

“To be honest, I’ve always liked fashion. I always liked getting dressed. From the beginning I just liked clothes I liked sneakers all the time. It was always a thing for me, I just never thought of it as something to actually make a living out of and make my job,” the 28-year old tells SLAM.

Barnes ended up connecting with James Johnson, who suited up fro the Brooklyn Nets this season, during his time in Dallas. It was then that Barnes truly made strides in the fashion industry, in large part because of this relationship with Johnson; who he calls one of his ‘best friends’ to this day.

“I’ve always met different members and teammates on his team. At the time he was playing with the Mavericks, and I met Dorian Finney-Smith and Trey Burke at dinner. We all just got cool. Probably like two weeks later Dorian booked me for my first game, my first time styling him. They played the Knicks probably like a week or two later, and I styled him and he wore my hat,” explains Barnes about the first time he styled an NBA player.

Barnes started his brand, Drip Sold Separate, in July of 2020, a mere nine months before styling Finney-Smith. Since then, he’s worked with standouts around the L, fellow Pennsylvania natives Wayne Ellington and SLAM 236 cover star Kahleah Copper to four-time rebounding champion Andre Drummond back when he was a member of Barnes’ hometown Sixers earlier this season.

However, little did Barnes know that Drummond would eventually end up teaming up with with both his best friend Johnson and another player he would soon work with: Kevin Durant. If you told that Barnes back in July of 2020 when he first started Drip Sold Separate that he would work with Durant, he may have called you crazy. Barnes has been a fan of KD since “forever.”

“Kahleah was in New York, they were playing the Liberty, so I was already going to the game. This was probably not too long after I came out with my first hat, and she texted me like KD gon’ be at the game and I was like alright bet I was going to take a hat. One of my friends that knows KD as well, I tell him bro you gotta hit KD up, I’m going to the game and I wanna give him a hat,” Barnes explains how he first met Durant.

Everything then changed after Johnson signed with Brooklyn over the summer.

“I always go to James’ games and being that I’m in Philly and New York is right there, I started going to almost every home game. I started going to the games and me and K [Durant] just started seeing each other all the time too. So like, we starting to put a face to the name. We acknowledging each other, we’re shaking hands, we’re catching up for a couple seconds and then I made James a 1-of-1 hat, and I made him a 1-of-1 hat [too],” Barnes says.

Durant ended up wearing that hat in a postgame press conference following a game against the Clippers. “I was just geeked up, like I was hype. My favorite player got my hat on, and then we started building a rapport, we got pictures speaking together at the game. It was dope.”

From there, a true relationship blossomed into what eventually would become a collab between Barnes’ Drip Sold Separate and Durant’s media network company, Boardroom.

“I’m just like, man he liked my hat so much I gotta figure something out. One of these days I was just in the house watching the [Boardroom] podcast and they had their merch link in the bio. I click on it and I’m like, they don’t got nothing for real — and they don’t have hats, like KD loves hats, how do you not have hats,” Barnes explained on how he first got the idea to try and make something between the two brands.

“So just thinking ahead, I just created something. It just so happened the “D” from my logo fits right in the middle of “Boardroom” so I just created the hat at first, and then I make a sweatsuit just in case this goes somewhere and they wanna see what else I got.”

When Durant and the Nets were in Philadelphia on March 9th, Barnes had a sense of urgency to talk to Durant about his mock up designs. Who other to turn to than James Johnson? Going into Johnson’s hotel room, Barnes expected to talk about the game that was scheduled for the next day. Instead, he was greeted by the two-time NBA champ sitting ominously on the couch.

“I’m like oh shit. Damn. KD right there. I instantly got nervous. Inside I’m going crazy, I’m sweating for the first 30 minutes. So then we just chilling, watching the game, listening to the game like normal people. I’m comfortable now, we’re laughing and joking. I said something about the 1-of-1, and he said that’s one of his favorite hats.”

After getting Durant’s blessing to work with his brand, Barnes knew he had to speak to Durant’s business partner Rich Kleiman since Durant was focused on the season at hand. After meeting with Kleiman following a Nets game, a mutual agreement to work together was formulated. In fact, Durant had already talked to Kleiman about Barnes’ proposal.

The drop was officially released on May 15th. That day marked not only a momentous occasion for Barnes, but it came with mixed emotions.

“The date was the one year death anniversary of my brother, he got killed last May 15th. So Sunday was just a crazy day for me, my emotions was all over the place. I was upset and hurt about my brother, but I did something monumental so I made that day really like a honorable day.”

Having top of the line quality fabric for both pieces of clothing with such a tremendous the backstory behind it, Barnes says the collaboration with Boardroom couldn’t have gone any better, especially when it came to decision-making. “They let me do my thing with it. I really appreciated that, for real,” Barnes said. “It means everything. Opportunity don’t come by very often, especially an opportunity like this.”