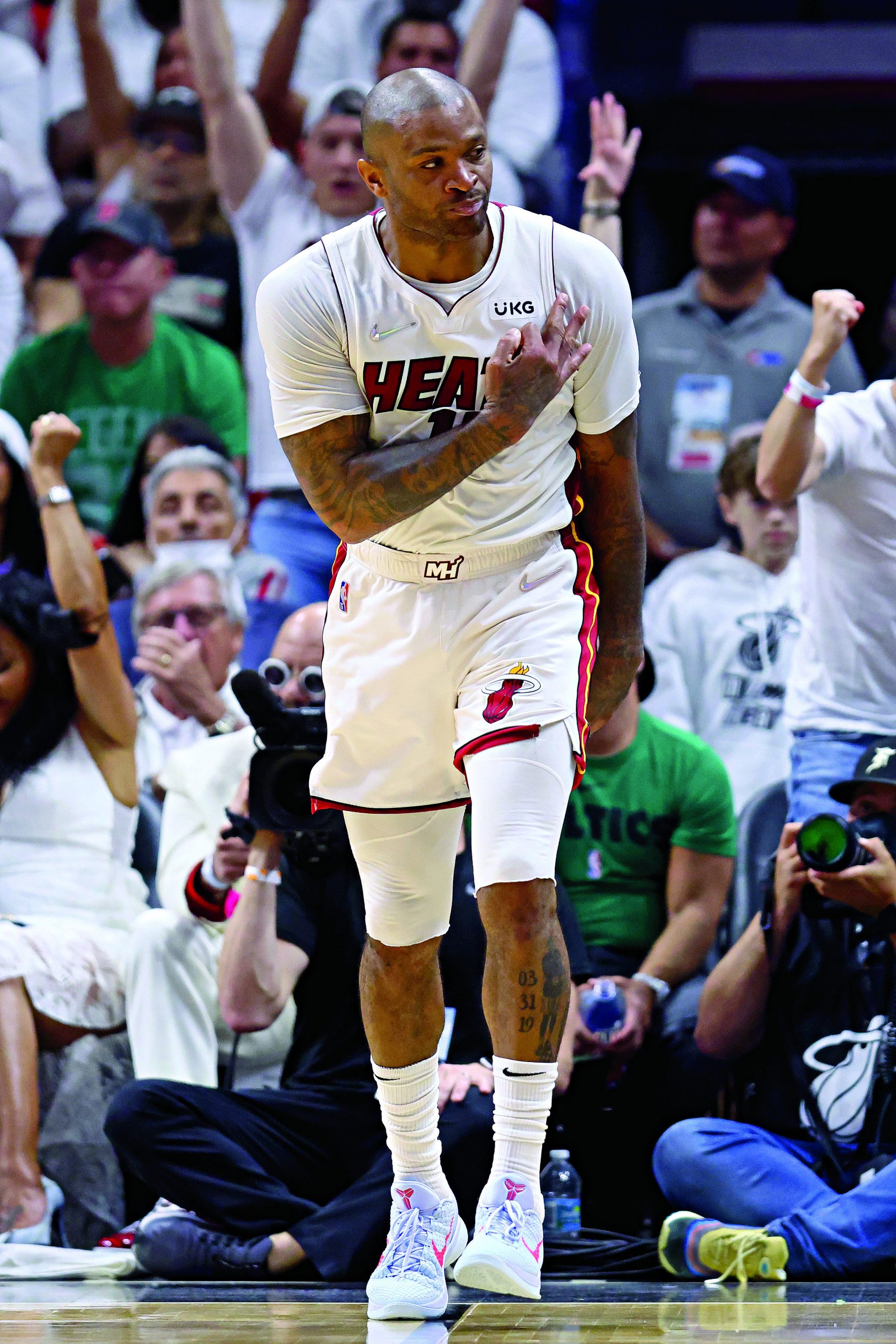 Here’s the best of a very long list of SLAMKICKS-approved footwear giants.

Julius Caesar reigned over the mighty Roman Empire with the famous words of “veni, vidi, vici.” Those words translate to “I came, I saw, I conquered,” which Jay-Z used in a song during his mighty reign over music. Hov is PJ Tucker’s favorite musician. This season was yet another encore of conquering for the NBA’s mighty, unbeatable, unrelenting, reigning Sneaker King.

By now it’s common knowledge that DeMar DeRozan has played in every single pair of Nike Kobes throughout his career. The amount of variety, from the lows to the mids to the highs, lands him on this list yet again. What gets him second billing, though, is his “WNBA” Kobe 6 PEs. Bean’s relationship with the W needs no explanation, so please watch the WNBA and please support the WNBA in the same way DeMar DeRozan does.

Stephen Curry came out the gates with an entire pack of Curry 9 colorways done in collaboration with Sesame Street. But the 9 wasn’t just another silhouette. It’s the second one in his line to obsolete rubber midsoles in favor of the Flow tech that is pioneering different construction in basketball sneakers. Many more fire colorways followed after Elmo, Big Bird, Cookie Monster and Oscar the Grouch got their shine.

Trae Young and adidas handled their business for this introductory silhouette. The Trae 1 was treated with numerous colorways, some of which matched the Hawks’ uniforms and some of which stood out as singular statements. “I think this shoe is going to bring out a lot of the creative ideas in my mind,” Trae told us in last year’s issue of KICKS. He was right.

Sheer volume of high-level Kobes, KDs and Kyries would’ve been enough
to land Ja Morant a spot on here. His intention on creating separation became crystal clear when he started to mix in outrageously loud customized Kobe 6s. The only part of Ja’s sneaker season that was as rare as the actual pairs was him repeating sneakers; almost every game came with something different.

Jayson Tatum has great chemistry with Marcus Smart and Jaylen Brown and Al Horford and he’s just as in sync with Jordan Brand’s Senior Promo Colorway Designer Kelsey Amy. Together, the duo made dozens of Air Jordan 36 PEs that told Tatum’s story, illustrated his interests and paid homage to the legendary Kobe Bryant.

Back again with his now-familiar rotation of Kobe 4, Kobe 5 and Kobe 6 PEs, Devin Booker introduced us to a couple of new 6 colorways that were adorned with, of course, “Be Legendary,” the pair of words that Kobe left him with back in 2016.

For someone who isn’t even from this planet, LaMelo Ball did a damn good job of introducing the world to his first signature sneaker. The lead colorway’s all-red makeup contrasted crazy against Charlotte’s uniforms, while the mismatched “Rick and Morty” drop proved that traditional rules were of no concern to the 1-of-1 hooper.

A ton of colorways, a few more colorways and then a couple of extra colorways define the D.O.N. #3’s run this past season. Spida has proven time and time again that he’s going to use his signature line to express himself, be it his love of Marvel, Monster’s, Inc. or the University of Louisville.

Nothing new here. Well, that’s technically not true. The King did play in the LeBron 19 this past season. And some retros in new colorways. The nothing  new here is that we’ve seen this man display an arsenal of ridiculous sneakers for almost two decades, so when he pulled out a golden version of the Nike LeBron 20-5-5 in his home region of Northeast Ohio, it was a reminder of just how long King James has been at the top.

There’s grandeur in PJ Tucker’s consistency and his intentionality in this sneaker game. Sure as Alexander the Great rising each morning to examine how he could extend his rule across lands far away from Macedon, PJ’s extensive knowledge of history has furthered his dynastic rule as the Sneaker King. He’s the one pulling out samples that were made for Ray Allen and Gary Payton, playing in Kobe 6 PEs inspired by Kanye West’s original run of Nikes. He even played in those OG Yeezys this past season. The throne is being watched, meticulously.

Rookie of the Year

In addition to several in-line adidas models, Jalen Green (bigggggg SLAM Fam) spent his rookie season in D.O.N.s, Dames, Hardens and Traes. But to keep it a Bucky Barnes, the real reason that our guy Jalen is getting this award is he wore the adidas Gil Zero twice. For the uninitiated, the Gil Zero is the actual silhouette that reintroduced the low top back to modern basketball over 15 years ago (absolute all due respect to Bean and his fourth sneaker). The young fella showing love to Gilbert Arenas made him the easiest pick of this entire awards section.

You’re for sure saying to yourself that Stephen Curry has had almost a decade of signature sneakers and that KICKS just put him on the first team from this past season a few pages back. You’re asking how it’s possible that he’s also being awarded with the Most Improved title. But never before have we’ve seen someone with such a technologically advanced main silhouette mix in old models like the Curry 1 (in new and old flavors) and the Curry 6. He also debuted the Curry 4 Flotro, an update of his iconic model from five years ago that now makes use of his groundbreaking Flow tech in the midsole. Those three factors are how this seasoned sneaker vet was a lock for Most Improved.

LeagueFits Tunnel Look of the Year

So long ago that it almost feels like a myth here in 2022, Jordan Brand used to lace their players with amazingly beautiful colorways of retros. Seeing the old Jordans, as well as pairs in the late teens and early ’20s, in colorways that didn’t have red or black was a thrill, and those pioneering players and their PEs became legendary, lore-like figures in the annals of basketball sneaker history. Jayson Tatum pulling up to the NBA playoffs in a brand-new Air Jordan XIV PE was a brief return to the glorious days of yesteryear.

Best of the Best

The post The 2021-22 KICKS Awards appeared first on SLAM.