From the NBA to Top Names Around the League, Here’s How the Basketball Community is Tapping into the Art World

Maryland Flames Basketball > Basketball News > From the NBA to Top Names Around the League, Here’s How the Basketball Community is Tapping into the Art World 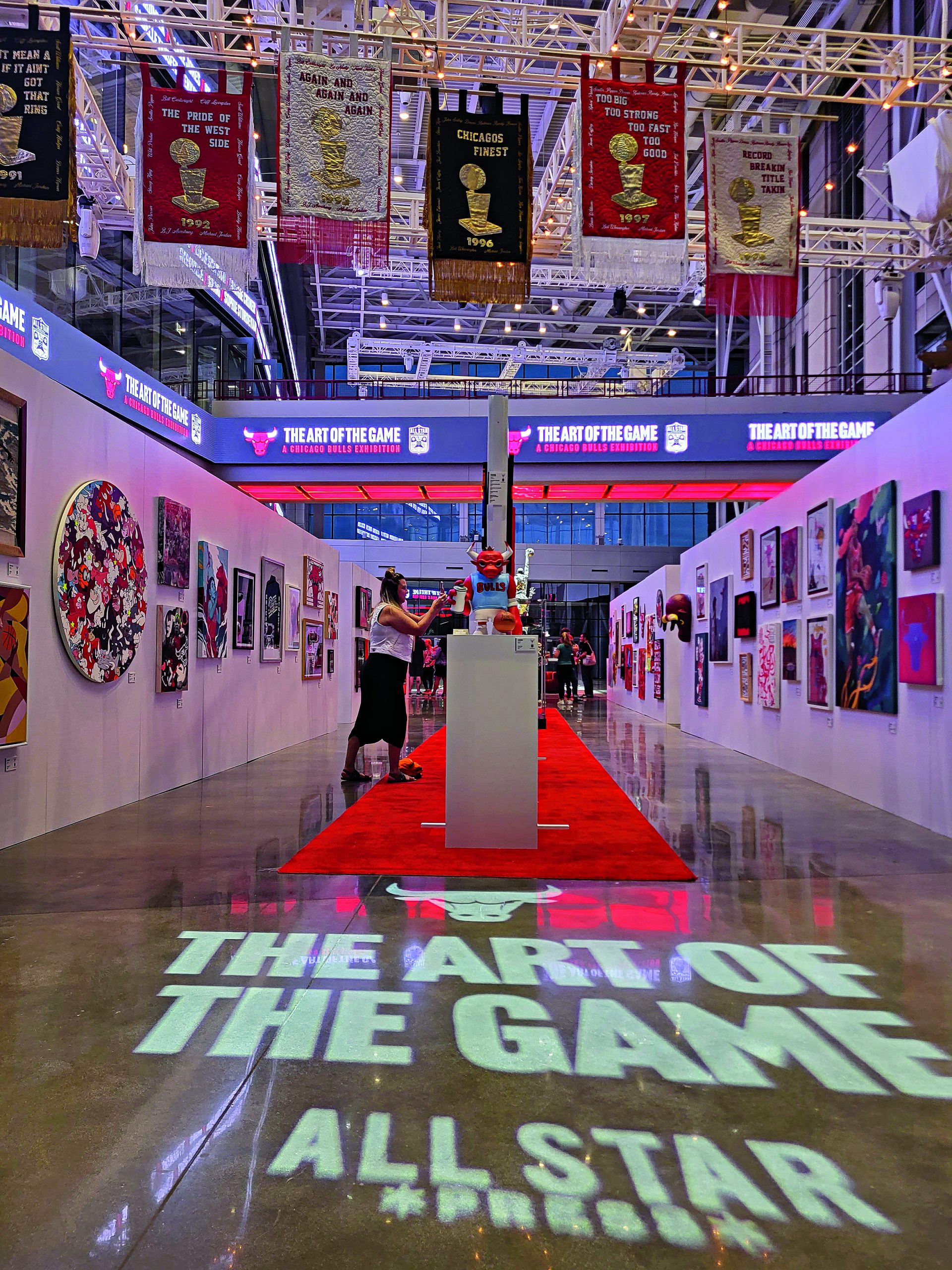 This story appears in SLAM 240. Get your copy here.

Over the weekend of September 3rd, thousands of fans streamed into the house that Michael Jordan built, the United Center in Chicago. DeMar DeRozan wasn’t laced up. There was no game going on. Fathers and sons, mothers and daughters were not there to see Zach LaVine defy gravity but to witness artistry of another genre. Inside this hoops sanctuary, among the six championship banners and Larry O’Brien trophies and retired jerseys hanging in the rafters, was a giant pop-up exhibition featuring 120 fine, street and graffiti artists from 15 different countries. This gallery, containing hundreds of works for sale, with as many interpretations of the game, was the main attraction of Bulls Fest 2022.

The “Art of the Game” exhibition is a collaboration between the Chicago Bulls and local printer, designer and curator Zissou Tasseff-Elenkoff, owner of the gallery All-Star Press. This weekend was not the first time the two entities teamed up but instead represented the culmination of over 30 projects the franchise and the local Chicago gallery have collaborated on, going back to 2018. What started as a sourcing of local artists to create game-day posters grew to limited edition stadium merch drops and manifested into Bulls Fest 2022, a spectacle even Tasseff-Elenkoff was taken aback by.

“This was something I have not seen on a scale this large. It was a very special weekend.”

Bulls Fest is indicative of a growing trend in the NBA, and other corporations, of an increased interest in and embrace of street, graffiti and fine art.

The League’s interest is not new, of course. The culture of street art and graffiti mirrored, matured and grew with the popularity of the sport, as basketball overtook baseball and football to become one of the country’s most viable global exports. Hip-hop, along with the astounding levels of play, ingenuity and genius of the athletes, is indeed the engine that powers the viability and allure of the NBA to younger audiences stateside and across the planet.

The players grew up with and were often from the same communities where emerging emcees, b-boys and b-girls, graffiti artists and DJs lived, and innovated the youth cultural practice that would bring together more young people.

From the vibrant sheen and clean and stylized fonts of ’90s Starter jackets and Mike’s gold chains, to Spike Lee’s Mars Blackmon commercials and the braids, tattoos and fitted caps of Allen Iverson, the NBA was the first major sports league to follow the lead of the culture, though reluctant and not without a fight, due to generational gaps and racial fears.

Graffiti and street art have been moving to the center of the more formal and fine art world over the last several decades. Banksy is a showstopper at Sotheby’s, OG graffiti writers like Futura and Lee Quiñones have become highly coveted in collections around the globe, and NBA and WNBA teams have commissioned some of the most well-known street artists in the world to honor teams and their players. The Lakers have worked with Mr. Cartoon and OG Slick to create murals and limited merch. The Phoenix Suns partnered with local muralists in 2021 to devise new logos and put the faces of Devin Booker and Chris Paul all over the city.

This past spring, the city of Milwaukee and the Bucks commissioned graffiti writer and muralist Mauricio Ramirez to paint a 50-foot photo-realist portrait of Giannis Antetokounmpo on a building facing Fiserv Forum. The result is a stunning tribute to the Greek Freak, the game of basketball and the team. The mural is part of a business district improvement plan and has become a new landmark and attraction for people to meet in front of, taking and sharing photos. For the artist, it was a dream come true.

“My mom grew up in Milwaukee, and on my dad’s side, everyone lives in Mexico,” Ramirez tells us. “I grew up in the ’90s, playing basketball with friends, and when I was growing up, it was like, Whose house are we playing at?”
His older cousins were into graffiti and stylized lettering and were in the graffiti crew DS aka Drop Squad. For Ramirez, that was “my true introduction to art, color theory, drawing and the tools I was introduced to: markers, spray paint. And since then, I’ve wanted to get better and better. Graffiti and hip-hop are all about skills. Going hard, snapping, and that’s the mindset I bring to each project, especially if it’s in the public.”

Tubz speaks of his work with a similar fervor and extends the analogy to players in the League. “I was thinking about how seriously NBA players take their craft. It’s as serious as I take my art. These players give everything. They dedicate their lives to their sport, their craft. They’re constantly in the gym. They were shooting in the backyard when they were kids idolizing Jordan, doing the fade away, saying ‘Jordan!’ I was doing that, too. And 10 years later, they are in the draft.” Being recognized by the team and franchise he idolized as a kid brings a similar feeling for Tubz and artists like him. “I feel like this is my draft. I’m getting drafted to the big leagues.”

For Tasseff-Elenkoff, who has owned galleries and helped give a platform and profile to underrepresented artists for decades, this moment represents, “a cultural shift toward youth.”

“Murals and street art and people like Shepard Fairey, Cleon Peterson and Pose, are all components of that culture, and on a local level, people like Sentrock and JC Rivera all resonate back to the streets and what kids are interested in. And if brands and these teams want to stay relevant, they have to shift into new media and new culture. And a lot of that, over the last two decades, has been through art.”

The art world, like the league, has scouts who seek and develop new emerging talent and connect artists of the unknown to the largest stages and platforms. Like in any field, there are those who pursue the path for a bottom line and there are those who are called to the space because of a love and vision for the work, a gift of sorts for seeing what others cannot.

Mr. Nice Art is a curator, collector and visionary with an eye for what will be popular in years to come. A kind of shit-talking iconoclast who walks the walk.

“I never wanted to be the person that wanted to be the face of anything,” he says. “Growing up in Chicago, you move in a particular way.” He is shrouded in an MF Doom-like mystery. He does little to no press and is nearly impossible to find pictures, or word of, on the internet. He also might be one of the most important connectors in the world of contemporary art and culture.

Mr. Nice Art grew up in a Southside neighborhood a high school away from Chicago Vocational, home to then-prep star Juwan Howard, whom he first met in the 6th grade. Years later, in 2007, while working retail at Neiman Marcus and styling people like Kanye West and Jerry Lorenzo, he connected again with Howard and his wife when they came in the store. After commenting on Juwan’s Panerai 289 Luminor rose gold watch, the two rekindled their friendship. Howard eventually encouraged Mr. Nice Art to take the commissions he was making from Neiman’s and consider investing in art. While Howard was collecting Kerry James Marshall and other notable—and expensive—artists, it forced Mr. Nice Art to “look for Chicago artists early on, because I couldn’t afford what my boy Juwan was affording. Dude is a millionaire.”

Mr. Nice Art began going to the makeshift studios of young artists and applying what he knew about retail and the maturing of fine watches to the world of art. He developed relationships with unknown painters from the studio, street and graffiti art scenes around the same time hip-hop in Chicago was gaining more and more international notice. Cultural communities often rise together, and in 2012 when Chief Keef and Chance the Rapper were beaming examples of the young genius coming out of Chicago, Mr. Nice Art happened to be working with a local emerging painter and sculptor named Hebru Brantley.

In 2012, Brantley was having a show for private collectors that Q-Tip was DJing. During prep for the show, Howard called and asked what Mr. Nice Art was up to. He told him about Brantley’s show and Howard said something to the effect of, “S**t, hook me up if you think he’s good.” Howard was serious and followed up saying that he would send money to Mr. Nice Art and he should pick out something nice within that budget, keeping the rest for a commission.

Mr. Nice Art attended Brantley’s show and walked away with six original pieces, one of which LeBron James saw hanging inside Howard’s home.

“We always knew Juwan was going to be a coach. As he was playing, he was always directing the game on the court,” says Mr. Nice Art. “To keep it real with you, the Heat had him on the roster not only to be a good example of a Black man but also to be…a mentor to LeBron.”

And the student did receive the lessons. James, as Mr. Nice Art tells, wanted to do something special for his teammates and was encouraged by Howard to think of an investment in art made by a Black artist. Mr. Nice Art connected James with Brantley, who then commissioned 15 original works to celebrate Miami’s 2012 NBA championship.

That was 10 years ago. Since then, athletes have invested millions into the contemporary art market. Mr. Nice Art credits moguls like Swizz Beatz and Jay-Z for pushing the culture forward, and he acknowledges collectors like Patrick McCoy who was a mentor.

“The torch was extended, and guys like me took it,” he adds.

He is preparing for a million things all at once, including connecting some of the younger artists he is working with to the major collections of both private high net worth individuals and the permanent collections of major museums.

“I don’t hear ‘Collect art,’” he says. “I hear, ‘Preserve your history.’ We wouldn’t know what the cavemen were doing if we didn’t see the art they placed on the wall.”

The post From the NBA to Top Names Around the League, Here’s How the Basketball Community is Tapping into the Art World appeared first on SLAM.