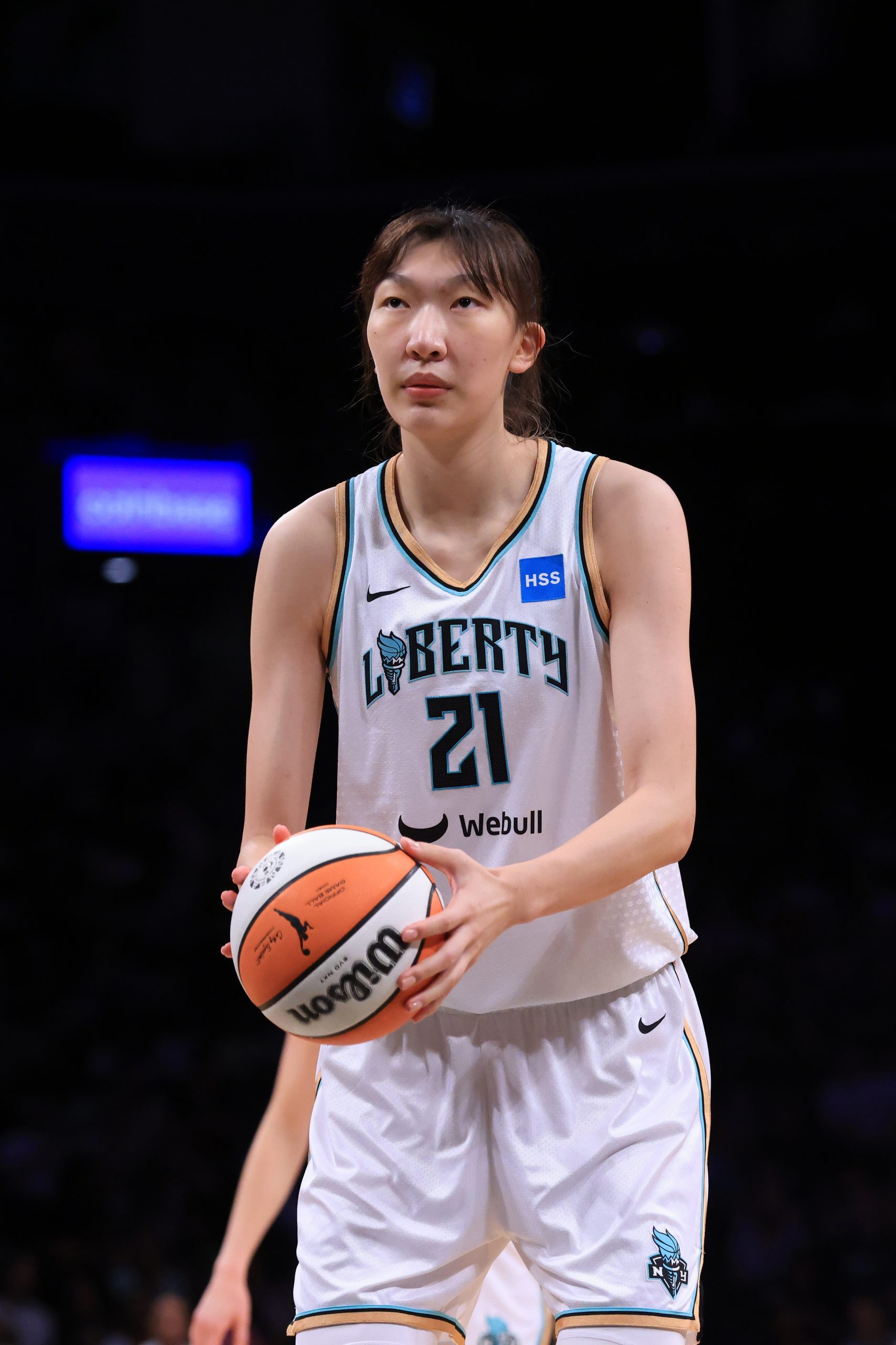 When the entire world was on halt during the pandemic, New York Liberty’s Han Xu found herself returning to China with a goal in mind: be prepared for the WNBA. Han, who was drafted 14th overall by the New York Liberty in the 2019 WNBA Draft—making her the youngest in her draft class and the second-tallest player in League history at now 6-foot-10—missed the following season due to the pandemic after playing limited minutes as a rookie.

Now that she’s back, Han has emerged as an exciting piece to the Liberty’s success this season as they look to make a run in the playoffs. The team made a major statement on Wednesday with a Game 1 win against the Chicago Sky.

For Han, who is averaging 8.5 points and 3.6 rebounds in 16.8 minutes per game this season, playing with the National Team during those two years allowed her to become dedicated to working hard through every opportunity—she competed in both the Olympics in 2021 and won a silver medal with China that same year at the 2021 FIBA Asian Cup.

“When I was at home during the pandemic, I experienced the Olympics and Asia Cup and gained a lot of experience from those tournaments,” Han says via a translator. “I just kept working hard because my goal is to just prepare myself for the WNBA.”

Now, she’s suiting up in the 2022 WNBA playoffs and already being dubbed the WNBA’s next Yao Ming, not only because of her size and height, but because of the excitement she’s building around the game, and inspiring young girls in China. According to AP News, her highlights have millions of views on platforms in China. Back in July, Han put on a 24-point performance in a win against the Las Vegas Aces, one of the best teams in the League.

Han, who grew up idolizing Ming, has even had the chance to talk to the all-time great—he gave her a piece of wisdom, too, regarding how important it is to work hard. “Yao told me, ‘Over here in America, you’re on your own and you have got to earn everything,’” Han says. “I got to compete for playing time. So, basically, I just have to work hard and earn everything I want.”

It’s been a journey for her to get to this point. Born in Shijiazhuang, Han has been working to get to this point since she was young. Han was first introduced to the game early on, as both of her parents played professionally in China for a brief moment in their careers.

“My parents were both professional basketball players and they were brought here,” she says. “My mom brought me to her practices and [I] watched the women’s team practice. And also, we watched a lot of basketball games at home.”

She soon started to realize that she, too, could play at the highest level—and it wasn’t long before she started making waves. At the NBA Academy in China, which began its women’s program in 2018, Han emerged as one of the most impressive international young players coming out of the Basketball Without Borders Camp. Originally, Han contemplated going to school, but at that point, she was already advancing in her development.

“In China, you can either go the professional route or you can go the school route. So for the professional route, there’s pro youth teams for younger players that are maybe 15 years old, 16 years old,” Han explains. “If they choose to go to school, they can also go to high school to become a student athlete and then graduate. Then they can go play in college.”

For Han, who was also a member of the U17 FIBA roster for Team China, the experience made it all the more clear to her that going the pro route was her chosen path. “At the time, I wanted to go the pro route because I had the edge at the age of 18. I had already been invited to the Chinese national team. Since I got that invite, I wanted to become a pro,” she adds.

Still, she’s had to adjust to not only a new environment and team, but to the American style of hoops. “The focus [in China] is more on teamwork, playing together and also having a great discipline for Chinese basketball. But out here, the players are definitely more confident. Sometimes it can be less teamwork but more star power here.”

As she’s been finding her rhythm, Han has been guided by mentors along the way, including Stefanie Dolson, who has played overseas in China.

“I’ve been looking up to [Stefanie] when I was younger because she played for a CBA team, [the] Jiangsu (Dragons). She plays the game with a very high IQ and she also has a great body frame,” Han says. “She’s been teaching [me] a lot of things. I really appreciate her.”

When we caught up with Dolson earlier this season, she only reciprocated the sentiments about Han. “First of all, the sweetest person alive. She’s just so young and is so willing to learn and listen,” Dolson said. “She’s been an amazing part of this team. I think everyone loves her, adores her, and I’m really excited to see how much better she can get because she’s so young.”

As she continues to find her footing on the Liberty, Han hopes her journey inspires others to change the culture of basketball in China for the better.

“In the future, I just hope my story can inspire the next generation to believe that as long as you work hard, you can achieve anything in life—anything you want in life.”