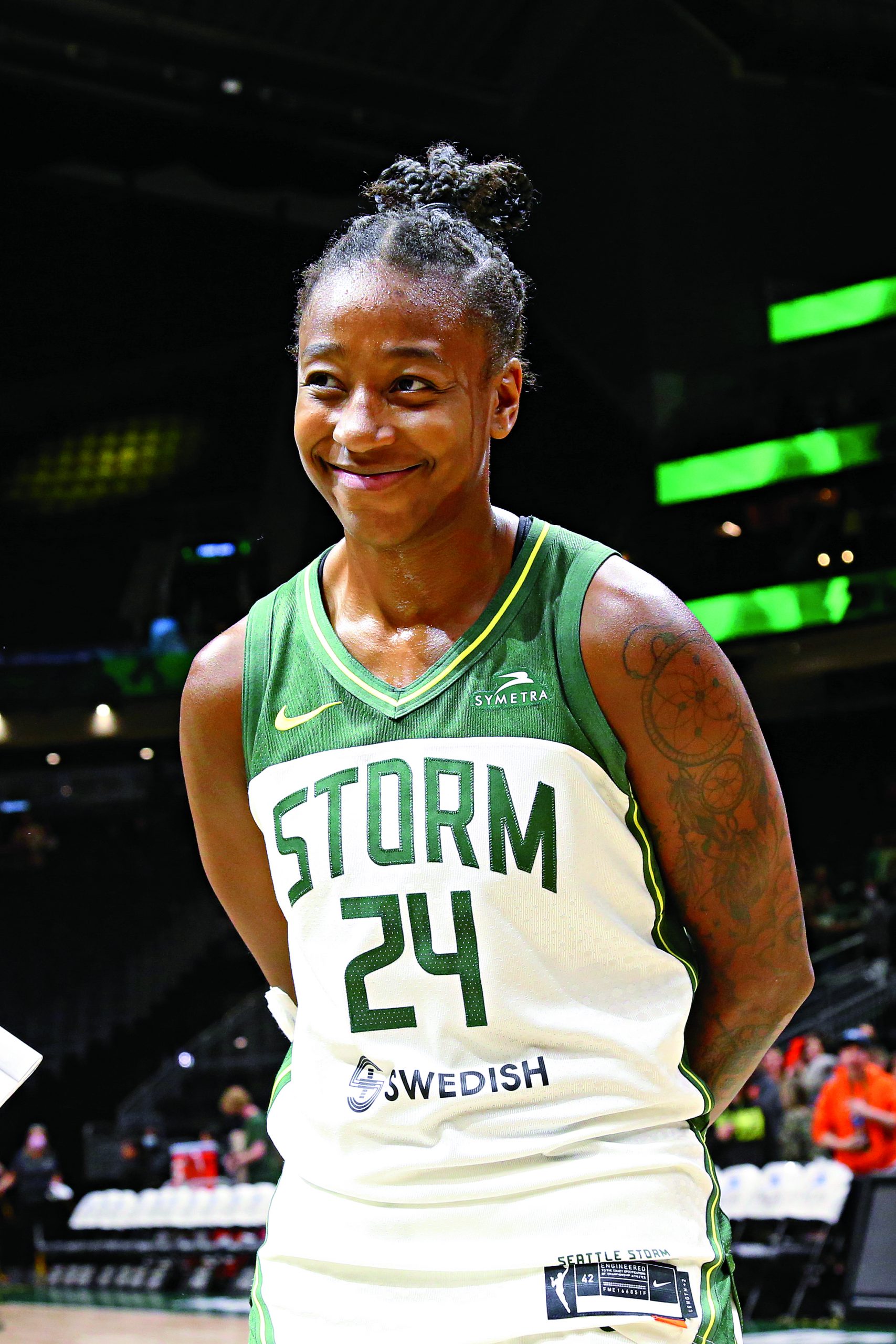 Seattle Storm guard Jewell Loyd has had a phenomenal career and is one of the WNBA’s bright superstars.

However, it’s her work away from the court that pulls the strings of her heart.

Growing up in the suburbs of Chicago, Loyd built a name for herself as an athlete. From the likes of the city’s greats on the hardwood like Candace Parker, Isiah Thomas, Cappie Pondexter and, of course, Bulls icon Michael Jordan, there’s a rich basketball history in the Windy City.

Jewell learned at an early age that she wanted to be more than just an athlete but also be of value and service to others.

Through Loyd’s partnerships as a professional, there’s a recurring theme and focus of support for the community.

Whether she’s working to revitalize The Warehouse gym back in Illinois, where she spent countless hours developing her skills as a basketball player, or helping to fight hunger, she believes in giving back to those in need—quite fitting for her name, Jewell.

During Women’s History Month, Loyd partnered with Los Angeles Lakers’ assistant coach Phil Handy’s 94 Feet of Game app and DJ Khaled’s We The Best Foundation for the Future of Basketball Is Female campaign. Through the initiative, 1000 scholarships will be provided to female hoopers along with access to essential basketball skills in order to propel the next generation of great athletes to be skilled, crafty and fundamentally sound.

Jewell Loyd pays it forward every chance she gets.

For someone enjoying the prime of her career with so much left in the tank, she finds the time to be of assistance to others in order to help their dreams come true.

We recently caught up with Loyd to learn about the importance of all of her endeavors, the impact she looks to make and why it’s important to her that she gives back and is a positive example to the next generation of athletes.

“I understood that I had a lot of resources from not just my parents but other people that wanted to see me prosper,” she says. “I understand that’s super important and not every kid has that. If I’m able to give that experience or help a kid achieve their goals or dreams and help be exposed to other things that they’re not always exposed to, that’s what I want to do. That’s always been a big thing [for] me and my family—to serve others.”

She further explains how serving others is something the Loyd family takes seriously.

“Something we talk about and is one of our main pillars of my family is to serve,” she says. “I look at all the things I do for the kids and the next generation. I have nieces and nephews and I’ll do the same with them as well. I always try to find ways to give back because I wouldn’t be here without the help that I received.”

Loyd takes the time to acknowledge those who contributed to her various successes. “I want to pay that back to the next generation of kids and athletes,” she adds.

On the court, she’s known as the “Gold Mamba,” a name given by her mentor, Kobe Bryant. Off the court, she’s simply a role model. With everything that Loyd does, there had to have been some sort of early inspiration used as the catalyst on her quest to help. And quite simply, she didn’t have to look very far. There were early examples of dedicating time to others, because it started in the home.

“For starters, for sure my mom—she worked in the Chicago Public Schools,” Loyd says. “It was always a different perspective since I grew up in the suburbs and my mom taught in the city. I would go to her school, and I would see that they wouldn’t have the things like our school district or would go on the same field trips as us.

“I understood that wasn’t fair and didn’t make sense to me. My mom always did a great job of bringing her students to Bulls games or going to the Art Institute. Anything that our district would do, she’d encourage and help her students do as well.”

Another inspiration for Loyd was Pokey Chatman, the then-head coach of her local WNBA team, the Chicago Sky. “Pokey played a huge role,” she says. “I was in the gym with her at a very young age. Seeing how she coached and how she taught while being in a power and leadership role. It was something you didn’t get to see often.”

Chatman served as the General Manager and Head Coach of the Sky until 2016. Loyd would often visit Sky practices in order to further develop her game and had the opportunity to get early insight into what would become her future as a professional.

“Getting to know her from that level and seeing it from a young age, to understand you have a voice and a reason to be here and you have value,” Loyd says, reflecting on Chatman’s teachings. “Between my mom and then Pokey as a coach in something I loved to do every day, it gave me perspective on how to treat others moving forward and how to really just use your voice and platform.”

Representation matters, and that perspective was important.

Now an assistant with the Seattle Storm, Chatman is able to see up close and personal what’s become of that young player who used to sit in on her practices.

“I remembered she was a special player. She knew how to play with and without the ball in her hands, but you could also hear her voice. She kind of reminds me of Seimone [Augustus] in that sense,” Chatman says, referencing the future Hall-of-Famer who played her collegiate career under Chatman at Louisiana State University.

“It’s like they’re doing it from their core and not doing it for the spotlight. If you don’t dig, you won’t know. It’s not anything for show or something that they’ll just dip in and out of just to show that they’re there,” Chatman adds about Loyd’s quiet approach to her community involvement.

There are often times when celebrities and people of status allow their work to be overshadowed by the ubiquitous attention surrounding their fame. That’s not the case here.

“When you get in Jewell’s space, you know she’s regular folk. You feel her spirit. She doesn’t want the attention but she wants to do right by people. It’s centered around her heart and what she wants to do,” Chatman says.

Loyd has all the makings of what many feel could be a perfect career. She knows how to win and has done it consistently. She’ll surely be known for the elite crossovers, the crafty step-back threes, acrobatic finishes around the rim and, of course, the thrilling buzzer-beaters. She’ll also have a lengthy list of championships and individual awards to her name.

However, what will probably stand out the most is the service to people and how she has been able to make a difference in the lives of those who looked up to her. She’s hands-on with the development of the next generation. The game is in good hands with her charitable efforts as she pays, or in her case, passes it forward.

“The basketball gets all the attention, and we [only] get a peek into the person,” Chatman says. “She’s quietly impacted the places that she’s occupied and I think that lives a long time because it touches so many people.”

The post How Jewell Loyd is Giving Back to Chicago and Inspiring the Next Generation of Female Hoopers appeared first on SLAM.