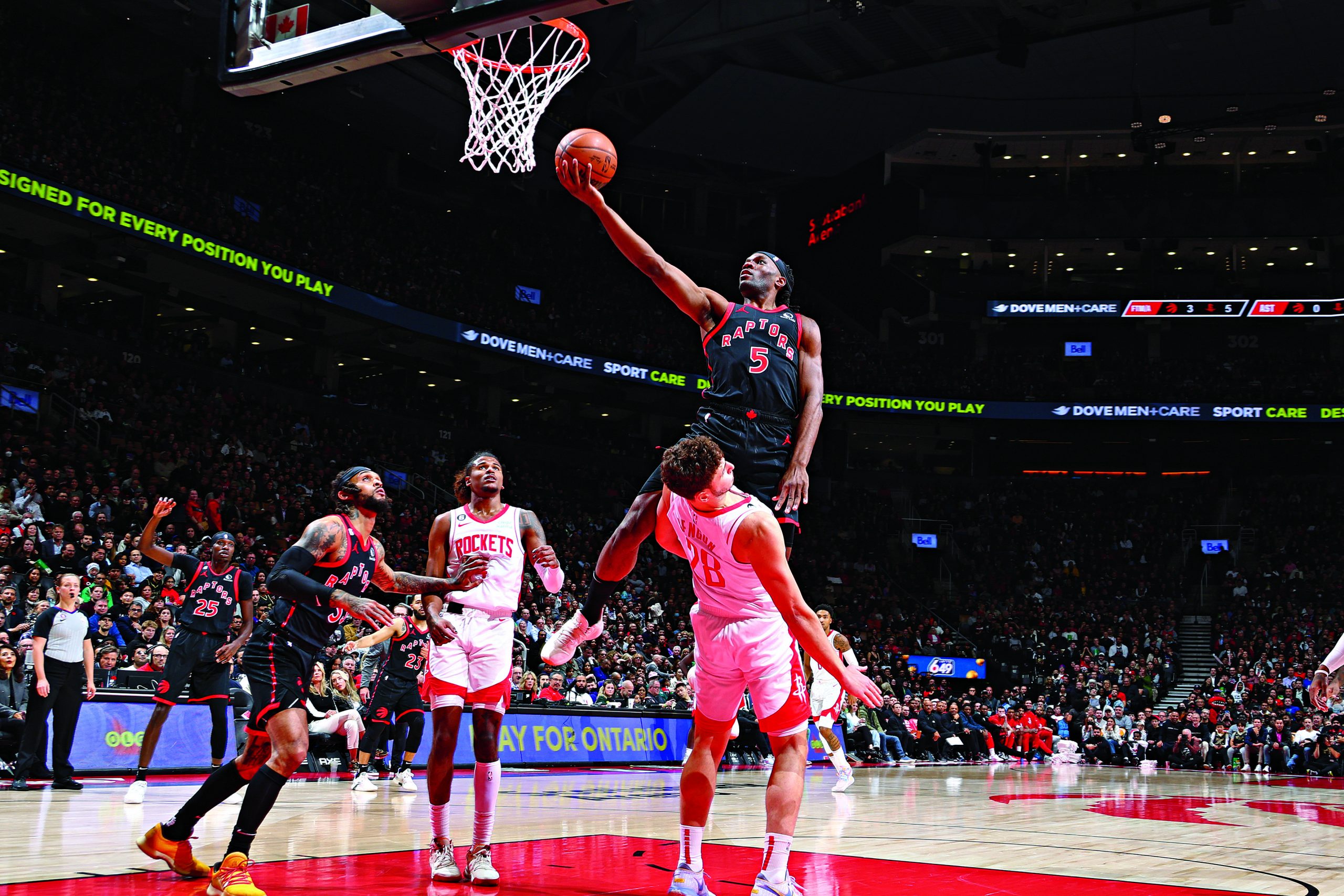 He just turned 23 in September, but Precious Achiuwa has already lived a lifetime’s worth of experiences.

Born in Port Harcourt, Nigeria, the 6-8 forward did not start playing basketball until eighth grade, when he moved to the Bronx to play at Our Savior Lutheran School. From there, his hoops journey took him to St Benedict’s Prep in Newark, NJ, followed by a year at Montverde Academy in Florida before he joined the University of Memphis. After winning AAC Player of the Year as a freshman, Achiuwa entered the 2020 NBA Draft and was taken 20th overall by the Miami Heat.

Following a rookie season of learning under the tutelage of Jimmy Butler, Andre Iguodala and Udonis Haslem, Achiuwa was lying in his bed inside the Olympic Village in Tokyo, Japan, where he was representing the Nigerian national team in the summer of 2021, when he got a text from a friend. “You getting traded bro?” the message read. Achiuwa went on Twitter and found out he had indeed been traded to the Toronto Raptors, who were sending Kyle Lowry in a sign-and-trade to the Heat.

When I met Achiuwa inside a dimly-lit contemporary Italian eatery in the heart of downtown Toronto for dinner in early November, the first order of business wasn’t discussing his season—one in which he’s averaging 8.8 ppg and 7 rpg, as we went to press. On this evening, it was to figure out which bottle to order off the wine menu. Over the next few hours, Achiuwa shares with me all of his off-the-court curiosities, a reflection of the new worlds he’s discovered since moving to North America.

He’s tried Port wines (which I learned is a sweet, red, fortified wine from Portugal), sampled different reds, including Bordeaux, Malbec and this evening’s choice, a Julia’s Vineyard Pinot Noir. He’s saved this one on his wine app, which tracks everything he’s tried. He even has a vintage bottle from the Opus One Winery in Napa Valley at his home. He’s waiting for a special occasion to crack that one open. More importantly, he’s put all his friends—who were once skeptical—on to wine.

Achiuwa decided to move to New York at the age of 14 to be closer to his brother, God’sgift, who was playing basketball at St. John’s. In the Big Apple, he discovered a wide range of ethnic cuisine. Since being traded to Toronto, Achiuwa has tapped into the city’s diversity in food. Foran upscale dining experience, he prefers Via Allegro Ristorante, which also boasts a 5,000-bottle wine cellar. Achiuwa is among many Raptor players who have become regulars at Pai, a Northern Thai spot near Scotiabank Arena. His favorite restaurant in the city is Patois, known for its award-winning jerk chicken/Asian/Caribbean cuisine.

There’s a general curiosity within Achiuwa’s soul. Every hobby is a new deep dive. During the pandemic, he started to learn how to DJ, and after a cameo appearance behind the turntables at a recent team function, he’s now exploring the idea of DJing more events. There’s also fashion, something Achiuwa didn’t start to care about until high school. He admits his style isn’t meant to be flashy, like some of his NBA counterparts. He prefers his outfits to be personal and pay homage to Nigeria. This was evident in his Draft night suit, which Achiuwa picked out himself. The jacket was customized with his siblings’ names (Promise, Grace, God’sgift, Peace and God’s Will) stitched on the inside lining. He also wore an Aso Oke hat to pay homage to his home country. This summer, Achiuwa attended New York Fashion Week for the third time and rubbed shoulders with A-listers at the GQ party. He has started to work with his friends to design and produce one-of-one pieces for his tunnel entrances.

While he enjoys spending time expanding his wine palate, discovering new food spots and dipping his toes into fashion, Achiuwa knows it is the sport of basketball that has allowed him to discover the world. When our conversation turns to his improbable journey from Nigeria to the NBA, I ask him if he realizes how crazy his life story is to an outsider hearing it for the first time. As he finishes his glass of wine, he entertains the question and laughs.

“I think about it all the time,” he says. “Where I am right now, it makes sense, but it doesn’t make sense. Sometimes I sit and think, How did I end up here?”

To fully appreciate how far he has come, Achiuwa had to return to where it all began. He traveled back to Port Harcourt this summer for the first time in seven years to host a basketball camp through his non-profit foundation, WHAT IF UNLIMITED. After he announced the camp on his social media, kids from all over his home country started designing custom flyers to drum up excitement for the event. When Achiuwa arrived at the gym on the first day of camp, which had been planned for 350 kids, there was almost double the number in attendance. The four-day camp, which included a tournament on the final day, helped put Achiuwa’s entire journey into perspective.

“It was amazing,” he says. “These kids have probably never been around an NBA player before, and for them to see someone from the same place as them, that was special.”

The camp also allowed him to reunite with friends and family. He convinced his childhood friends to fly in from different parts of the country to play a pick-up game together, as they reminisced about how they would spend their weekends growing up trash talking each other on the court. By the end of the trip, Achiuwa was reinvigorated and felt a new sense of purpose and responsibility. The camp also changed how he viewed his stature as an NBA player.

“I told the kids that I got more out of the camp than they did,” he says. “It was a reminder of where I’m from and a reminder that I can’t take this for granted. I had no idea all these kids looked up to me.”

He already has plans to set up another camp back home.

Not long ago, Achiuwa was one of those kids, convincing his family to make the six-hour drive from his hometown to Lagos so he could attend a basketball camp organized by the Giants of Africa Foundation. “I was, like, 12,” he says. “I was probably the youngest camper they ever had.” (The foundation is run by Masai Ujiri, the current president of basketball operations for the Raptors.) The camp and the NBA’s Basketball Without Borders program ignited Achiuwa’s interest in basketball and eventually landed him in the United States.

Now, everyone in Port Harcourt is rooting for him as he continues to grow with an up-and-coming team in Toronto. Playing for the only Canadian team in the League has allowed Achiuwa to have yet another brand-new experience in a new country. It’s the first time he’s gone to the grocery store and found bagged milk. The first time he hopped on the highway, Achiuwa was confused by the speed limit signs, which were in kilometers. “I saw 100,” he says, “and I was like, What?! Is this NASCAR? Then I got on the highway, and everyone was driving so slow.”

The stereotype of Canadians being generally nicer than their neighboring Americans has also been proven true. “When I first came here, people were so nice to me that I was confused,” Achiuwa says. “I had to start telling people there’s nothing to be sorry about. I still have to tell people that.” In Toronto, he’s also discovered the city’s enthusiasm for their basketball team. “The best fan base in the NBA,” he says. “It’s not even close.”

In his third NBA season, Achiuwa now has the potential to become a core piece on a Raptors team hoping to return to contention in the Eastern Conference with a full roster of athletic wings. After a promising finish to the ’21-22 season, Toronto is looking to him to take another step forward. And following a summer trip back home, the motivation is bigger than ever for him to become one of the best young players in the League. He wants to continue setting an example for those following him closely in Nigeria home.

“I want to be one of the most respected players in the NBA,” Achiuwa says. “I’m a role model for the kids back home. It’s given me a different type of fire.”

The post Inside Precious Achiuwa’s Deep Curiosity for the World and the Fire that Drives Him appeared first on SLAM.