Jerami Grant is Ready to Take His Game, and His Style, to the Next Level

Maryland Flames Basketball > Basketball News > Jerami Grant is Ready to Take His Game, and His Style, to the Next Level 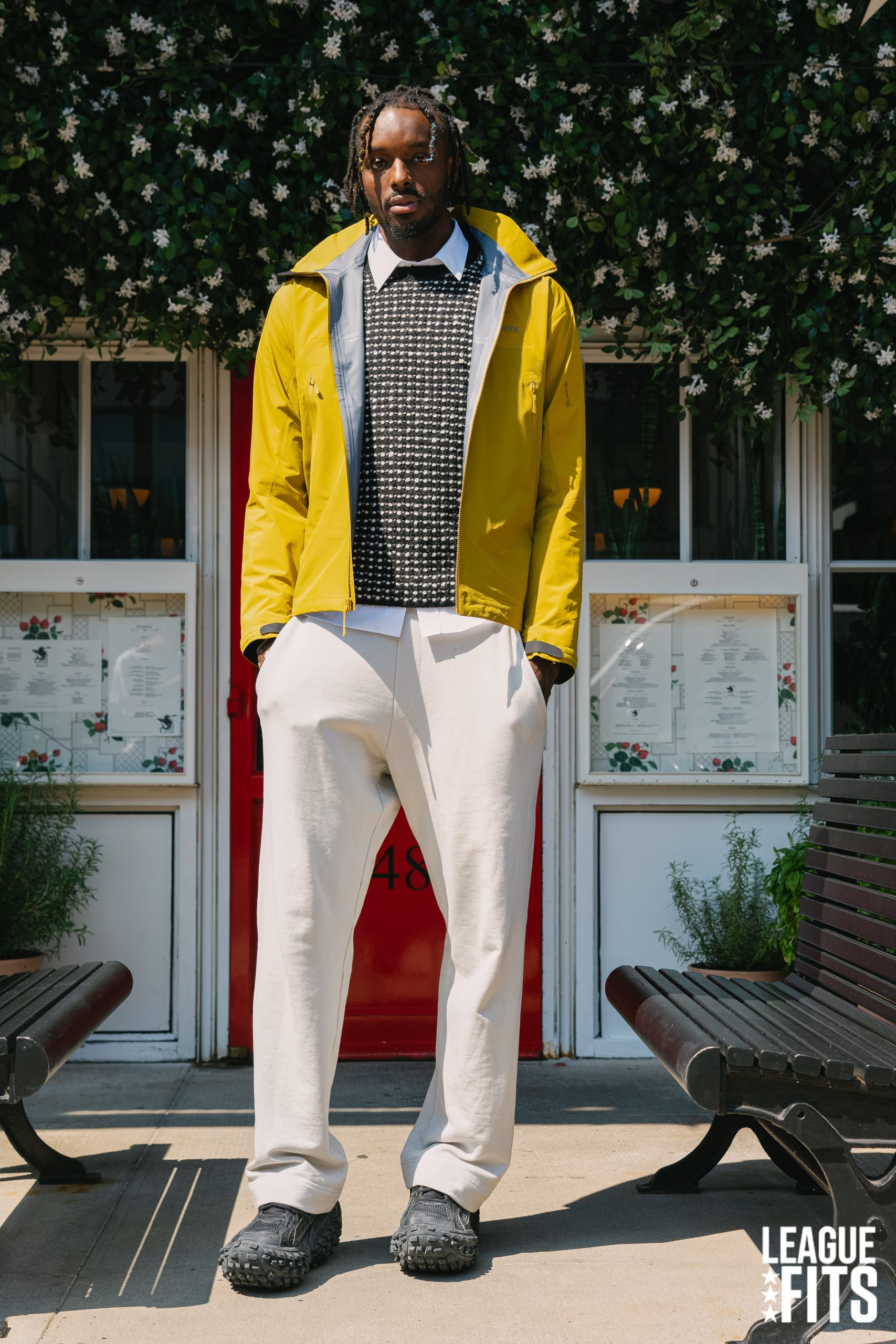 This story appears in SLAM 240. Get your copy here.

Jerami Grant is quick to admit that he has chameleon-like characteristics on and off the court. Long before the NBA, Grant knew how to fit in and gel with other players, especially the highly-touted prep stars he called teammates. At perennial powerhouse DeMatha Catholic (MD) HS, Grant, a four-star forward in the Class of 2012, played alongside Quinn Cook, Victor Oladipo, Josh Selby and his brother Jerian. “It’s helped me a lot,” Grant tells SLAM. “Pretty much my whole basketball career, I’ve been playing with guys of great caliber. We had five NBA players on a high school team.”

Playing alongside guys of said caliber helped Jerami learn how to be effective on the basketball court by doing more than scoring. It also helps when you come from a bloodline of hoopers. Jerami and brothers Jerian, Jerai and Jaelin—known as the J-Boys—are sons of former NBA player Harvey Grant, who spent 11 years in the Association and is the twin brother of four-time NBA champion Horace.

“It was competitive,” Jerami reminisces on his childhood. “Always playing 1-on-1 with my brothers, working out and everybody wanted to be the best. The competitive edge is something I’ve been able to carry over from [the] younger days to now.”

Despite catching the tail end of his father’s career, Jerami remembers spending lots of time in NBA arenas and locker rooms, meeting some of his father’s and uncle’s teammates—Kobe Bryant, Shaquille O’Neal and Michael Jordan.

In high school, Grant held offers from Georgetown, Syracuse, Maryland, Marquette and Clemson before committing to play for the Orange. As a sophomore, Jerami averaged 12 ppg and 7 rpg while shooting close to 50 percent from the field before entering the draft, where he was selected 39th overall by Philadelphia in 2014.

In Denver, he put up 12.0 points a night and his numbers continued to rise. After the global pandemic put the game and world on pause during the second half of the 2019-20 season, competition resumed in the bubble in Orlando, FL, where Grant continued to showcase his ability to affect both sides of the floor. Tasked with guarding Kawhi Leonard, Grant used every inch of his 6-8, 210-pound frame to hold the reigning Finals MVP to 13 points on 4-17 shooting—Leonard’s lowest-scoring playoff game since 2016—and halt his postseason streak of scoring 15 or more points per game at 47.

The Nuggets’ first two playoff matchups against the Jazz and Clippers would go to seven games before the team would lose to the Lakers in the Western Conference Finals. When free agency hit, the Pistons offered one of the League’s most sought-after forwards a three-year, $60-million deal. The Nuggets ended up matching the offer sheet, but Jerami was looking for a more enhanced offensive role and there was no better place to do that than the Motor City.

In his first season in Detroit, Grant put up a career-high 22.3 points per game to go along with 4.6 boards, shooting 43 percent from the field, 35 percent from the three-point line and 84 percent from the charity stripe. He suffered a UCL sprain in his thumb as well as a calf strain, which limited him to only 101 games in his last two seasons.

“When the offseason came around this summer, he got the type of call he’s become familiar with throughout his career. While in Paris for Fashion Week, Grant’s agent would notify his client that he was being traded once again.”

The details: Grant was going to Portland for a 2025 first round pick (1-4 are protected) via Milwaukee, sending him into a $21M trade exception that gave Detroit $43 million in cap space.

“It was a bit abrupt,” he says of the trade. “A bunch of trade rumors and stuff like that. That one, obviously, had a ton of traction throughout the season. It wasn’t a huge surprise, but definitely all of a sudden.”

Now, entering his ninth season on his fifth team, Grant’s looking forward to starting a new chapter in Rip City. He joins a team with a reshaped roster and a franchise player who’s fully committed to building something special in Portland.

“I was excited, man,” Damian Lillard tells SLAM of when he found out about the trade. “It was a big moment for me because I had been wanting to play with Jerami for a couple years now. Just seeing him being on a winning team in OKC, then on a winning team in Denver and then kind of taking that leap out there in Detroit to be that No. 1 option and see where he can stretch himself out to really show his game. I love what he did in Detroit, and it brought him to a new comfort level with having to handle the ball, make plays and stuff.

“Everybody already knew he was the long, rangey athlete who can make threes, play above the rim, block shots [and be] versatile. Him having to go to Detroit and spread his wings and having that pressure on him every night is only going to make him even more valuable for us. Having a 4-man that plays 1 through 5, make threes, athletic; he’s big, he has good skills and he’s been in the right types of things to be coming into our team as our starting 4, and I think he’s going to help us.”

During the 2020 Olympics, Lillard and Grant played alongside each other to propel Team USA to a Gold medal. Lillard admits despite not being able to get the full Olympic experience due to the pandemic, it only made his relationship with his teammates, especially Jerami, that much stronger.

“That made us spend a lot of time together in the lounge, throughout the hotel at dinners and stuff like that,” Lillard continues. “JG sat either in front of me or behind me on the bus every day to practice and to games. Every day on the bus, we’d be talking about our situations with our team, and we were on teams together during practice. After practice, we’d be sitting next to each other, and we’d just spend a lot of time in the Olympics talking about how we would both want to play with each other…I’m just glad it came to life. He’s going to be—talent-wise and just the experience in what he’s done—our best 4-man in a long time since [LaMarcus Aldridge].”

It’s a mid-summer day in August and Grant’s speaking to us from his home in Maryland. The offseason’s been an eventful one for the 28-year-old. Aside from basketball-related obligations, Jerami spent time in Paris, one of his favorite places to visit.

“The history of it and everybody knows that’s the fashion capital of the world,” he says. “If you’re in to fashion and things like that, that’s where you want to experience it.”

The same way Jerami’s laser-focused on the intricacies of the game—learning opponents’ habits, making the right reads, being in the perfect spot on rotations to improve his shooting—he’s just as meticulous with the way he studies the runway.

“Eventually I do want to design and be able to be in that space in a different way,” he says. “I want to learn the ropes and how things work. I’m observant and paying attention to the way they move and the pieces that they put out. I’m not just going to shows for pictures, but to study what they’re putting out and different lines and stuff like that.”

Grant’s passion for fashion became more evident this year. His versatility has shown, too, with different statement pieces from brands like Balenciaga to Rick Owens, getting him out of his comfort zone to try new looks. He’s also emerged as a top candidate to win LeagueFits’ Most Improved Award.

“I think I’m a bit of a chameleon,” Grant says when asked to describe his style. “I don’t have a uniform yet; I feel I’m all over the place with whatever I like, whatever kind of fits me. To describe my fashion style, I think it’s definitely fashion forward and more of a Japanese style, especially right now. If I like it, I’m going to put it on.”

Jerami shares his two current favorite brands—Issey Miyake and Comme des Garcons—and adds Maison Margiela and Balenciaga to the list. In a world where fashion connoisseurs stay up to date with the latest campaigns and archive hunters scour the internet for specific pieces, Grant has a few products that sit atop his list: Cartier Crash watches and vintage Goyard and Hermes bags.

As we continue to chop it up, Jerami shares another favorite interest: philanthropy. His organization, Hour Generation Foundation, hosts about eight or nine events a year and gives back to inner city youth and single parents. Grant has also helped fund a homeless shelter in Detroit that’ll provide resources and a safe space to those in need.

“The way my mom raised me was you gotta give back,” he says. “I grew up going to church and with a strong foundation of giving back through philanthropy. I’ve been blessed with so much [and] it’s like a no-brainer that if you receive, you have to give.”

As Grant gets ready to report to training camp, he says he looks to expand his philanthropic efforts throughout the Pacific Northwest and is excited for the new start. The journey to get here prepared him for this moment.

“Playing with a ton of great players has helped me grow into the player that can mesh into any situation,” Grant says. “I don’t need the ball in my hands in order to be a good player. I don’t have to do what I did in Detroit. I did that because it was needed. Whatever my team needs…whatever Chauncey [Billups] needs, whatever Dame needs, I’m going to be able to do it.”

The post Jerami Grant is Ready to Take His Game, and His Style, to the Next Level appeared first on SLAM.