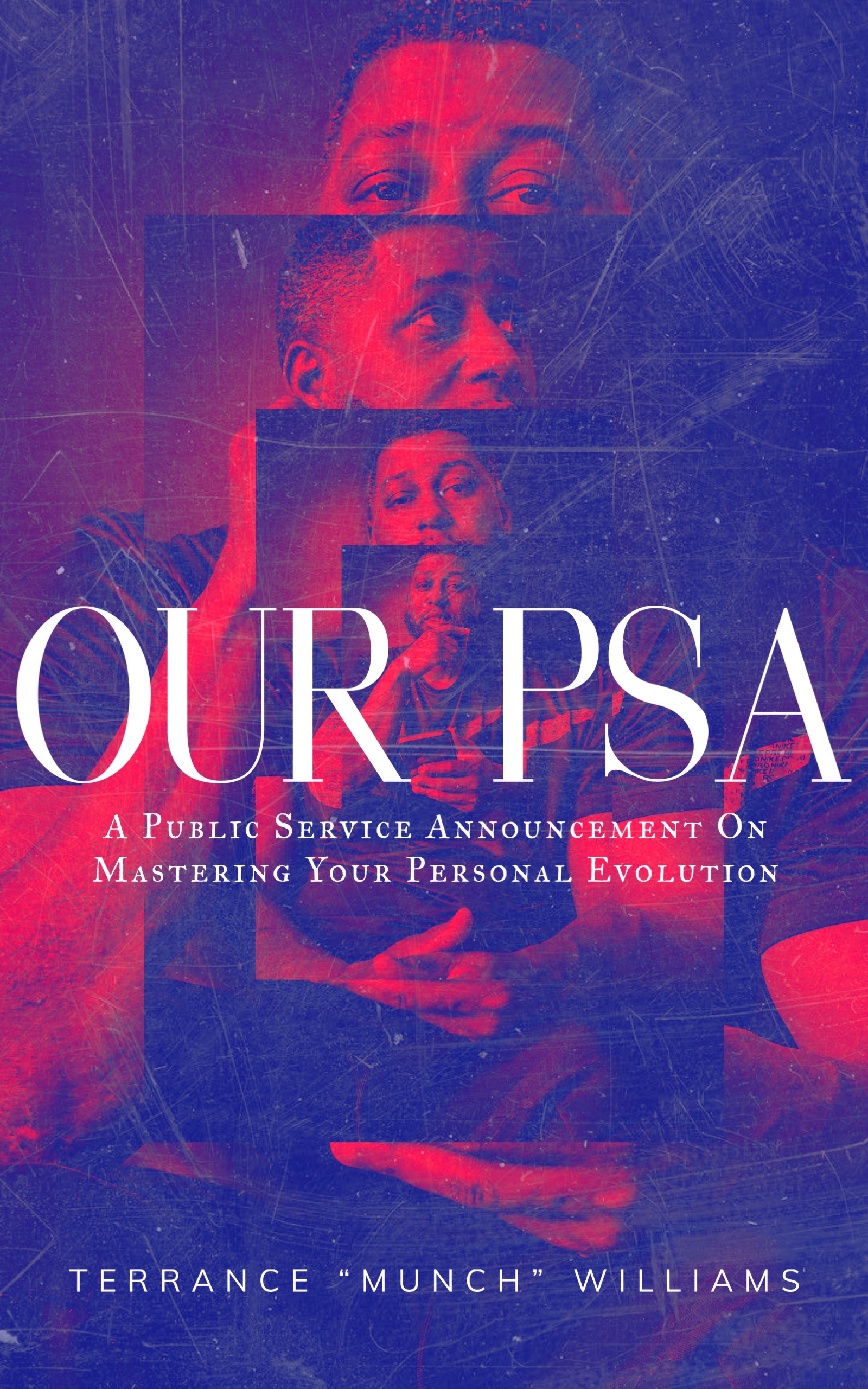 Terrance “Munch” Williams has continued to make waves both on, and off the basketball court throughout his career. As the Executive Director of the ProScholars Athletics (PSA), a position he’s held since 2008, Munch has helped turn an afterschool program into a renowned basketball organization that has produced modern NBA stars like Cole Anthony, Thomas Bryant, James Bouknight, and Mo Bamba. Williams also has a background in education, from working for Teach For America and teaching first graders in the Bronx, NY to spending two years as the Dean of Students at East New York Preparatory Charter School while earning his Master’s in Education/Building Leadership at the University of Phoenix.

Now, Munch is adding yet another notable title to his resume: author. In his new book, Our P.S.A., he provides an interactive and comprehensive guide to how young men and women, especially people of color, can navigate their everyday life, from school and relationships to dealing with adversity. Munch hopes to not only empower others, but to spark conversation—the book features lessons he’s learned throughout his own personal life and there’s even multiple choice questions that readers can answer and discuss with their friends and family.

SLAM recently caught up with Munch to learn more about the writing process and what he hopes readers can take away from the book. You can purchase the book here.

SLAM: What was the writing process like for you while you were working on this book?

Terrance “Munch” Williams: The process was, honestly, therapeutic when I first sat down and started to write [with a] notebook and pen. You just got these ideas circling through your mind. Obviously, outside of basketball, just as an African American male that’s been 40 years through the lifestyle, things that you go through, you try to focus on and make sure that you have an idea of where you came from, an idea of where you’re [trying to] go, and where you are [in the] present. The part that was natural for me was sitting down on a daily basis and writing. The part that got a little tricky in the process was after it was written—you go from writing in a notebook to writing on a laptop to self-editing to getting someone to edit [you] in a sense, and then that’s the part where you decide, alright, well what do I do with this because in order for it to get to the world, do you go to the big publishing company [or] do you go to the big editors??

That’s a process in itself, but that’s the process that takes away “the control” for me. I’m a person that likes to work at my pace and to do things in my style and make sure I like it and [that] it fits for myself before it touches the world. At the end of the day, the entire process was smooth because it was people that I trust, people that I know, and for the most part, it’s not overwhelming from the political aspect, and I look at it like, hey, it was a bucket list for me personally as a human and now that [it’s out] in the world hopefully it’s a gift and just a conversation starter for all the things we go through in the world.

SLAM: Could you elaborate a little bit more on what it was like to venture into this project and what you wanted the narrative to be?

Munch: It’s not hard. I’m humble [and] I think that it’s stuff that I’m doing on a daily basis. I understand the level that the program is at, but I also understand that where the program is today is 1,000 percent based on the men that I work [with] every day, the kids, the families, and everybody that puts their hand in the mud and continues to work at it. Even with this process, it was moreso [that] I’m jumping into waters that I’m not familiar with. I’m just a normal person, writing some stuff that [comes] to my heart and to my brain. So it wasn’t hard for me at all. The hardest part was, do I wanna be patient and wait on something bigger or do I wanna allow it to continue to be homegrown? I went with the homegrown part which is why the book is [available] on Amazon, and the editor is someone that’s not too far from me.”

SLAM: What were some of your favorite stories mentioned in the book?

Munch: The thing about the book is it isn’t about the kids in the program or grassroots basketball—it was just about the lifestyles of young African American males, whether you’re Latino or African American, and the journey you go through as a young boy, teen, and an adult. So, like, one of the topics is just the educational system when you’re a high-level basketball player and whether or not you’re taking your education [seriously and] whether or not those around you are providing you with the right tools to do so.

There’s [also] a topic called Pass and Pass. What I mean by that is, if you’re passing the basketball, scoring, and becoming the star of the local basketball team or [on] your [own] journey, if you’re doing that at a high clip, a lot of times in certain educational institutions, in certain places, they’re gonna pass you in the classroom. That concept of, hey, if you’re a superstar basketball player and you’re just getting pushed [to a point] academically, how many times is that going on in society?

It’s [happened to] my dad’s generation, my generation, and the generation behind me. That’s a norm in society, so I [try to] take you on this journey in my own life when I was in public school. I was a senior, and obviously at the time I was really successful on the basketball court, and the teachers and the staff and the security guards, everyone was behind me. [But] I wasn’t doing the right thing academically—I was passing the classes because I was a good basketball player. Until my senior year, I’m at my final stint and my math teacher gives me a 58. I’m upset about getting a 58, but in that process, I have to make a decision and that decision is: I could A, go see the principal and try to complain about it, I could B, suck it up and go to summer school, I could C, go see if I can do extra credit, or I could D, just drop out and leave the diploma all to itself. And in that story, that’s my life, and it gives you the moral of the story [which] is don’t allow somebody to belittle your education, whether you’re an athlete, not an athlete [or you] take academics [seriously]. Just do your best. You don’t have to be a straight-A student.

SLAM: What has the response been like to the book?

Munch: First thing is the shock factor of [how] most of the time when people see you in a certain space [they] label you in that space. Like, wherever your feet are—AAU coach [or] director—that’s what he is. I think the shock factor for people was, oh, I can’t believe you did that and, when did you have the time to do it [and] what is the process to it?

It’s kinda like, in a sense, you become a hero to your local friends, the people that you grew up with, close friends, family members, [and the] people that you’ve known for your entire life. They look at that space of, ‘Wow, you did that?’ Yeah, I can actually do it. Then there’s other people that’s like, ‘Wow, you motivated me to finish something that I’ve been thinking about doing or halfway started it.’ For my kids, it’s like, this is the exact example of what [we’ve] been always trying to tell you guys. You can be a big-time basketball player, but you can also enjoy life and try some things and see what happens right. There is no fail in this space for me because I’m not tagging myself an author. That’s not what I do for a living, so I want my guys to see and say, ‘Oh my director stepped outside the box, and he’s not just a college graduate [or] a person that [has their] Masters, he’s someone that wrote a book [and] ran [the] program. You can chase basketball and do it to the highest clip, but you [can] also have time to play the piano, try the trumpet, write poetry—just [do] anything you want to make yourself more versatile in this world.

For me, I think this is another example of not just myself, the men around me, of trying to show the guys at PSA,  never put yourself in a box. Do not let society tell you what you can do and not do. You get to determine that.

SLAM: You’re also putting people onto the concept of using the game to your advantage and not just letting basketball use you.

Munch: Yes, 100 percent. “Buck the system”, be who you wanna be. Think about it, if I have a whole group of people that wanna support me through my journey—whether it’s a high school coach, a trainer, an agent, whoever it is—[if] they wanna help and support the book because they’re interested in [how] this person stepped outside the box and did something different, [that] shock factor, let me support that.

SLAM: What do you hope people will get most out of this book?

Munch: My highest hope [is that] it’s gonna be a book that goes across cultures, across gender. Women can read the book and figure out some different stuff about men, [white] people and different races can read the book and learn about African Americans. It’s not [just] an AAU thing—the people that [can read this book] are AAU coaches, doctors, lawyers, teachers, firefighters, construction workers, they’re whoever. People who work at the diner, the pizza shop. People read. That’s the first thing I want people to do is [to] say, ‘I wanna read.’ [Even] teenagers [and men], [to say], ‘I’m reading, and that’s okay — I’m gonna read these two pages today but [also] talk.’ So I think it’ll be, at its best, a conversation starter throughout different cultures, genders, [and] age groups. That’s at its best.

SLAM: What’s your biggest aspiration in your own life? If nothing could get in your way, what would you want to achieve?

Munch: My answer to that would be not having to answer to anybody on a daily basis, being financially stable enough where myself, my family, and those close to me are okay, and they can continue to depend on me in some form or fashion. And I don’t have a schedule of what I need to be doing at any time.

SLAM: Looking ahead at this season, which PSA alums are you most looking forward to watching compete?

[At the NBA-level], I’m looking forward to seeing what happens with James Bouknight [and what he] does this year. I was just down in Charlotte [to see him], and he was doing a back-to-school book drive and some great stuff off the court. He’s obviously uber-talented but just seeing him be able to function in a young environment ‘cause a lot of the guys in Charlotte are extremely young for better or for worse. But yeah, seeing if he could take another jump towards becoming what everyone thinks he can become in the NBA.