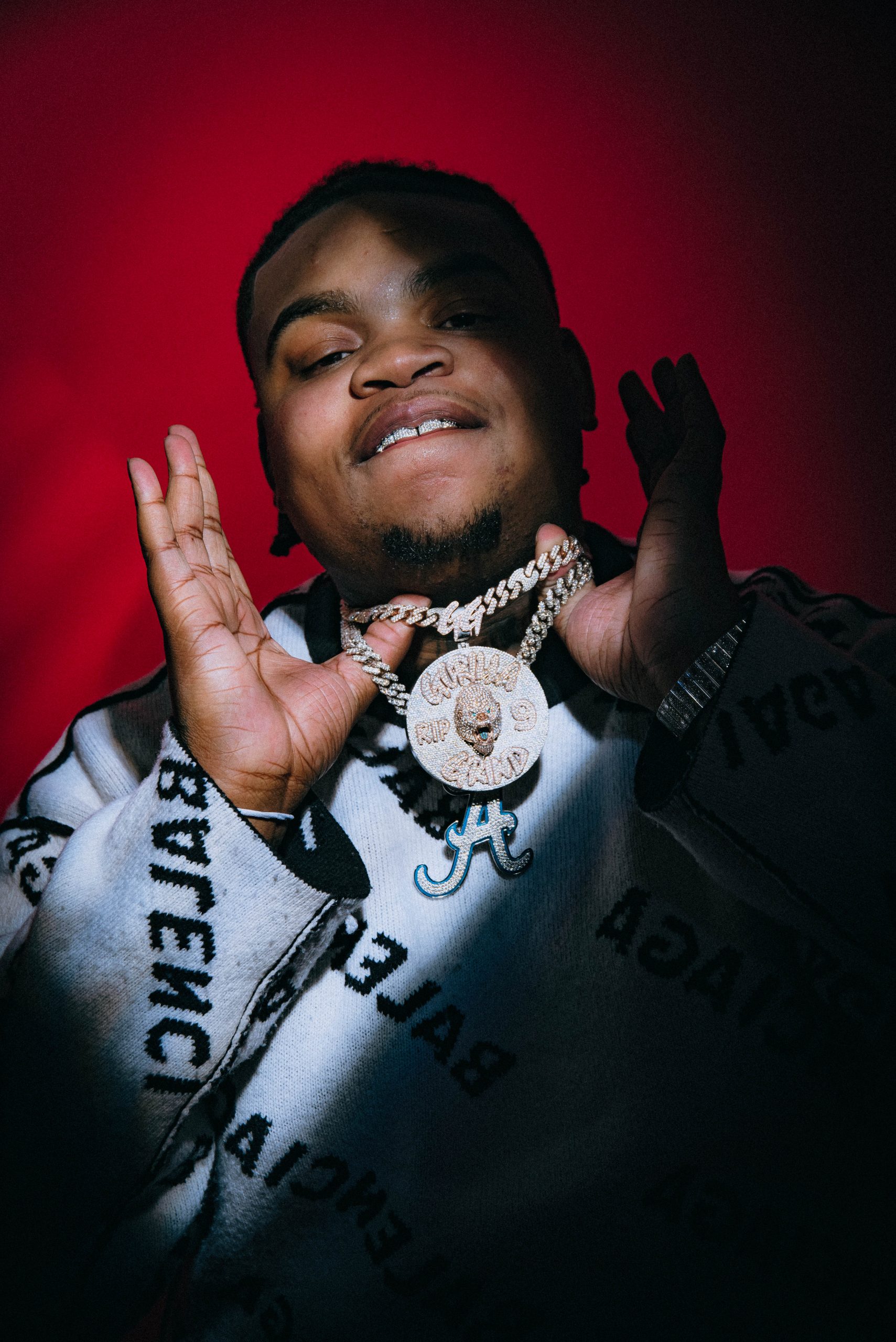 Big Yavo is primed to see his rise reach even more prominence after releasing his latest project, The Largest. The 24-year-old from Birmingham, Alabama, is a powerhouse of unparalleled energy and hard-hitting bars and is unquestionably faithful to his roots in the 22 tracks he selected for the album.

Yavo made sure to have Alabama-based artists featured on The Largest, giving nods to musicians from his hometown and looking to connect with “real genuine people.” He has Bankroll Freddie, Luh Soldier, Rylo Rodriguez, Big Jugg, GMF Fatboy, TLE Cinco, and Big Petty on his feature list.

Yavo arrived on the scene last year after his track “Rich” gained traction on TikTok thanks to influencers like Addison Rae, Charli D’Amelio, and Noah Beck, who all used his song in their posts. The track also gained support from music website AllHipHop and has earned over four million streams on Spotify.

Then came the track “Him,” which went on to be a viral hit on TikTok and led to 2 Chainz, Justin Bieber, Odell Beckham Jr, the NFL, and others recording their own TikToks using the popular song. Yavo has reached No. 1 on Billboard’s “Heatseekers” and cracked the Top 10 on Apple Music’s Hip-Hop/Rap charts with his 2021 album, Like Yay.

We recently caught up with Big Yavo to talk about music and hoops.

SLAM: Yavo, you use a lot of sports references in your bars; how did that correlation come about?

Big Yavo: When I was young, I used to watch sports a lot. The main sport I really love is baseball; I used to play baseball, but I just used to watch a lot of sports, and I know a lot of people, so I just be playing around with that.

SLAM: Who did you really try to play like? Who were your favorite hoopers growing up?

SLAM: So who’re you going with, between those two?

YAVO: People be like, You like LeBron? You hate Kobe? I wasn’t one of those people I f**k with both of them.

SLAM: The title of one of your new tracks is called “Shawn Kemp.” The sports references, is it natural because you grew up around it or just off the dome?

YAVO: Yeah, it really be off the dome. Like I said, I just know a lot of people [that like sports]. If I say one thing, I just think of something to rhyme with it, and if it go with what I’m saying, I’ll say it. It just be all right there.

SLAM: What was the creative process like in creating The Largest?

YAVO: It’s cool, for real. I just try not to rush it. Just go with the flow, but it’s gonna be hard, for sure. It’s gonna be a couple different vibes on there. Still have that turnt YAVO; it’s gonna be a good project. Nobody get in my way; we’re gonna be No. 1. When I say that, I mean major artists.

SLAM: Regarding the features, you’ve said in previous interviews that you don’t like to pay for features and that you’d rather it just be a natural vibe where relationships develop authentically. Can you elaborate?

YAVO: Yeah, I just feel like it should come natural. Everybody who’s on my tape, they came natural, [they’re] real genuine people. Not saying I wouldn’t pay them, I tried to pay Rylo many times, [but] he just won’t let me cause he’s a real genuine person. I tried to pay Freddie a lot of times, he won’t let me pay him. I’m talking after we work, not just paying off rip. I know they got sh*t to do; I know how this is. Sh*t like that’s going to come. People like that, that’s who I’m trying to lock in with anyway. You can pay anybody and smile in your face, and after, they won’t post [the song]. Not saying that’s everybody, [but] I’d just rather make friends the way I’m making friends.

SLAM: We’re y’all getting competitive in the booth during those sessions?

YAVO: When me and Freddie did the feature, like I said, he’s a real genuine person, so we were talking, for real. We ain’t really rap, for real. We don’t be on rap sh*t, for real, just chopping it up. It just depends.

SLAM: Any artists that you want to work with—underground or major?

YAVO: Drake, Rod Wave [is] hard. Everybody, for real. Moneybag Yo, NBA Youngboy, Lil Baby, it don’t really matter. I just feel [something] like that’s going to come, they see [my music]. I just started, a lot of people been rapping a long time, I just started, so I feel like I’m in a good spot for where I come from. I just look at where I come from, and based off where I’m at; I came a long way so the other stuff is going to come, too.

SLAM: When did you start taking music serious?

YAVO: I’d say after I dropped my second tape. But I still don’t be rapping like that. It’s easy for me, for real, when I just get in the booth, and I just do it. I probably make like two songs every time I get in the booth—let it add up.

SLAM: What’s the next goal for your career? What do you want to do ultimately?

YAVO: Just be as big as I can, you know, not forcing it. That’s the main thing for me, not forcing, I just let everything come. So, hopefully, we take off this year. I wanna do a lot of stuff, though, outside of rap. Get [as] big as I can in rap so I can have options to stop.

The Largest came out on November 25th and is available on all streaming platforms.