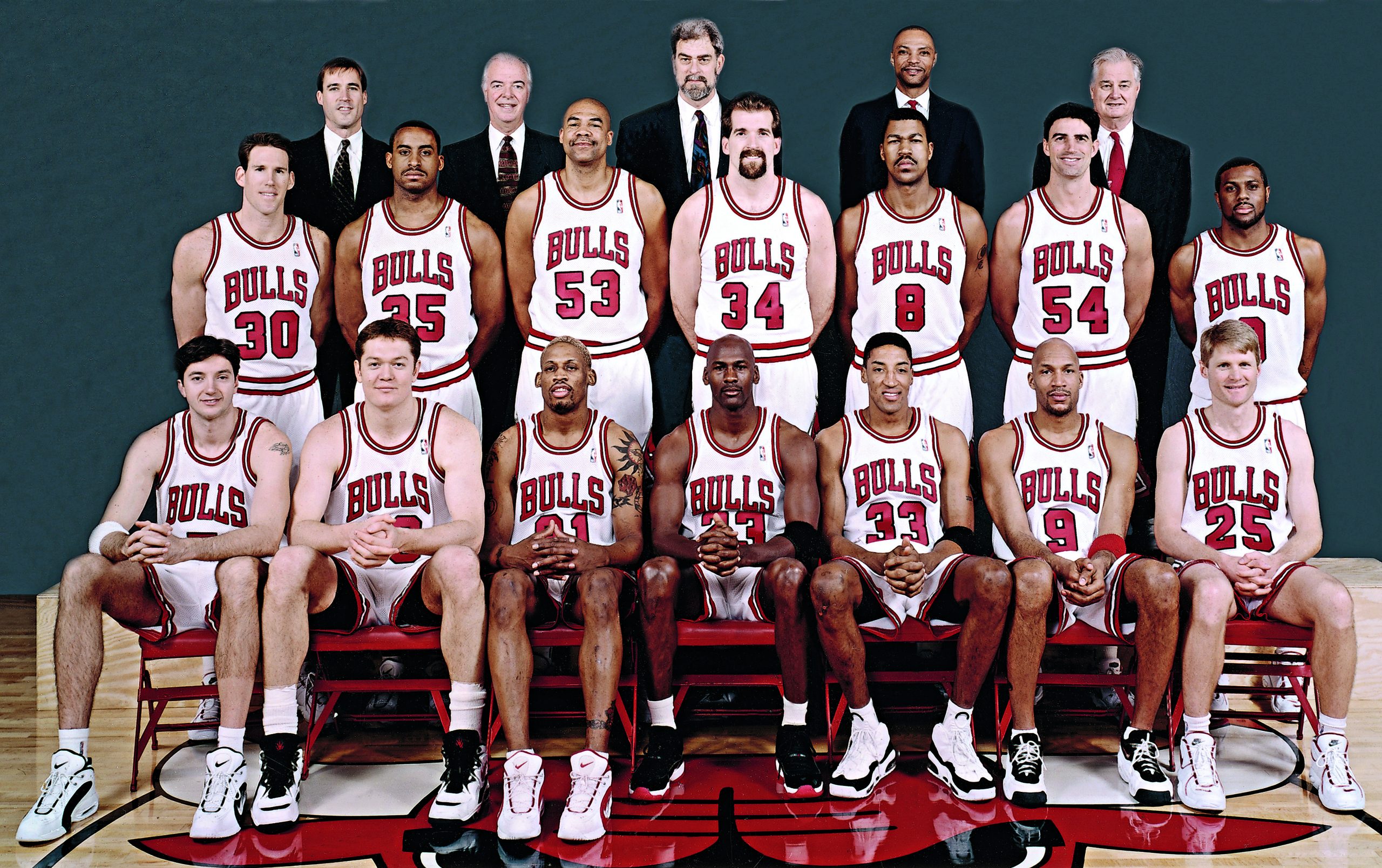 This team needs no introduction. While we argued and shouted at each other over who we felt should be included in our SLAM Presents TOP 75 NBA Teams of All Time special issue (shop here), there was without a doubt that this team deserved to be at the top of the list. Greatness speaks for itself, and this team, as we mention below, set the foundation for even more greatness to come.

To find out who else made it on the list, read here.

In February 1996, while the Bulls were warming up for a game against the Lakers in Los Angeles, a man ran out of the stands and onto the court, where Michael Jordan was practicing some free throws. The man threw himself at Jordan’s feet and remained there for several seconds before being removed from the arena by security.

Some people may have been unnerved by the display of homage, however strange it may have been, but it didn’t rattle Jordan. He and the Bulls rolled past the Lakers, 99-84, yet another convincing performance by the greatest team in NBA history.

It’s not like the Bulls hadn’t been great before. They won three titles from 1991-93. But then Jordan decided to play some baseball, and though he returned during the ’94-95 campaign, it was too late to lift Chicago to another championship. All that changed the following season, when Jordan and the Bulls embarked on a remarkable year that transfixed the nation’s sporting public and caused folks like the man in Los Angeles to do crazy things to prove their devotion to the team.

This was the first time Superman, Batman and Rodman were together, and the presence of eccentric forward Dennis Rodman alone was enough to create a frenzy. But putting these three giant basketball performers on the same team was almost too much for the sporting public to process. The Bulls became the nation’s number one sensation. When they showed up in town, fans worked themselves into a froth. Home games at the United Center were more than just celebrations. They were practically coronations. That’s how good the Bulls were and how much people around the NBA expected them to win it all again.

Jordan, of course, reigned. He won the scoring title for the eighth time in his career. He was magnetic and capable of causing sensations before, but this season his impact on society grew even more. He got his own cologne. He announced his new Chicago restaurant, which would open the following fall. And he was part of a traveling circus that rivaled the Beatles’ arrival on American soil. Wherever the Bulls went, they were mobbed by adoring fans.

Scottie Pippen was a big part of the show, too. His scoring numbers were modest—19.4 a game—but whenever rivals paid too much attention to Jordan, Pippen took over. And then there was Rodman, the rebounding, defending dervish with multiple tattoos and hair colors, whose effort could never be questioned. Throw in highly-talented European forward Toni Kukoc, center Luc Longley and productive backcourt guards  Ron Harper and Steve Kerr, and the Bulls were as complete a team as there ever was. It was all held together by Phil Jackson’s steady hand and Tex Winter’s triangle offense, which continued to overwhelm rivals.

On April 16, they dumped the Bucks, 86-80, to win their 70th game, thereby passing the 1971-72 Lakers for the most regular-season victories in NBA history. Chicago had winning streaks of 18 and 13 during the season and finished with 72 triumphs. It was a remarkable performance, one the Bulls matched in the playoffs. They skunked Miami in the first round and needed only five games to dispatch the Knicks in the Eastern Semis. The Bulls trampled Orlando to win the conference championship, setting up a Finals meeting with Gary Payton, Shawn Kemp and Seattle.

After winning the first three games of the series, Chicago stumbled twice, giving the Sonics some hope. It was hardly warranted. The Bulls won the finale, 87-75, to cap their history-making season. The greatest team ever laid the foundation for a 69-win regular season in ‘96-97 and a hysteria-inducing fandom that surrounded the ’97-98 season.

The post SLAM’s TOP 75 NBA Teams of All Time: No.1 appeared first on SLAM.