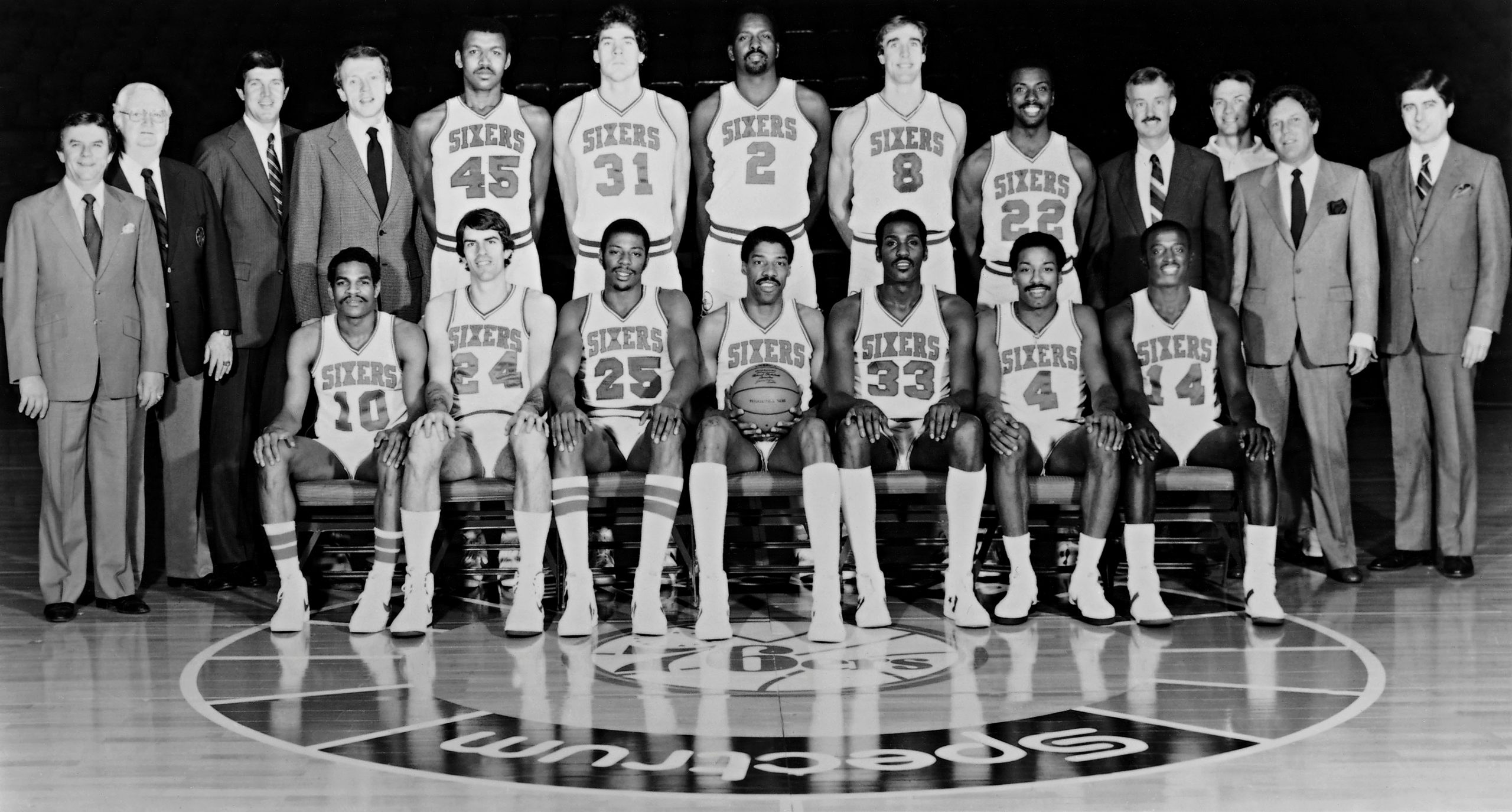 We’ve dedicated an entire special issue,SLAM’s TOP 75 NBA Teams of All Time, to ranking the best 75 individual season teams ever. This week, we’re unveiling which squads made it on our top 10. To find out who else made it on the list, read here.

The season after the Sixers lost the Finals to the Portland Trail Blazers, the team crafted a ticket sales pitch to fans informing them, “We owe you one.” The franchise didn’t pay up the next year. Or the one after that. In fact, the slogan became something of a punchline for the franchise that always had talent but couldn’t convert it to a title.

Philadelphia lost to the Lakers in the ’80 Finals and again in ’82. It seemed impossible that a team with Julius “Dr. J” Erving, one of the most exciting players in basketball history, would never hang a banner.

Not long before the start of the ’82-83 season, the Sixers executed a sign-and-trade for Houston center Moses Malone. All of a sudden the team of All-Stars had the final piece. With Malone handling the rough stuff in the middle—and sweating a ton in the process—Erving was free to soar over and around rivals all season. Meanwhile, the dynamic backcourt of point man Maurice Cheeks and clutch sharpshooter Andrew Toney provided ample trouble for opponents from the perimeter. And just when teams thought they had that quartet under some measure of control, Bobby Jones would come crashing through for a fastbreak dunk or to jam home a missed shot.

The Sixers took command of the Atlantic Division early and cruised past the Celtics. Their 65 wins were the best by far in the NBA, and as Philadelphia headed into the playoffs, Malone uttered the famous quotation, “Fo-fo-fo,” meaning the Sixers would win each of the three playoff series necessary to take the title in four games.

The Moses Doctrine looked pretty good after the first round, which the Sixers won over the Knicks in four. But Milwaukee won a game in the Eastern Finals, and Philadelphia had to settle for the five-game trip to the Finals.

Waiting there—fittingly—were the Lakers, who had many of the same players who had caused the Sixers trouble in previous Finals. However, L.A. would be without rookie James Worthy, who broke his leg late in the regular season. It likely wouldn’t have mattered. The Sixers were committed to rectifying their earlier shortcomings, and they blitzed the Lakers in four games, completing the sweep on the Forum floor where they had watched L.A. celebrate a year before.

When it was all over, the Sixers were able to put out another message:

Tap in now to get your copy of SLAM Presents TOP 75 NBA Teams Of All Time.

The post SLAM’s TOP 75 NBA Teams of All Time: No. 8 appeared first on SLAM.