The Art of Growth: How Alysha Clark Persevered Through it All to Make Her Return to the Mystics

Maryland Flames Basketball > Basketball News > The Art of Growth: How Alysha Clark Persevered Through it All to Make Her Return to the Mystics 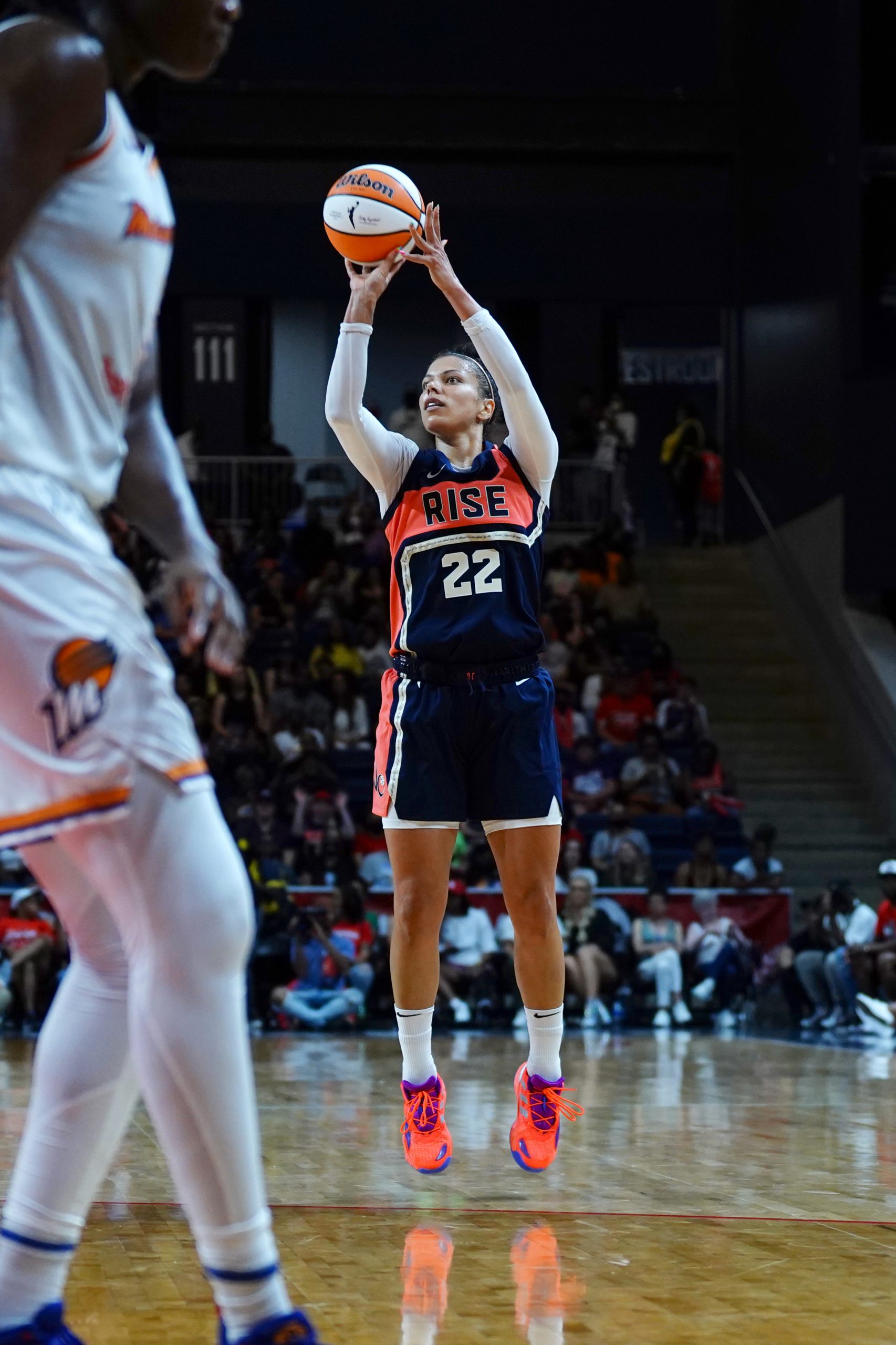 When asked to describe Alysha Clark, former coaches and teammates use the word “tough.” Her finishes are tough and her defense is tough. She’s carried that grit throughout her career as a basketball player and it remains one of the driving forces that forged her WNBA career ahead.

Current New York Liberty coach Sandy Brondello, who drafted Clark back in 2010 when she was head coach of the San Antonio Silver Stars, reveals that what makes Clark so special is her ability to find her niche and vastly transform her game. “She was the best scorer from college, played as a post player and how she kind of didn’t play as a post [in the WNBA] but came in and found her niche,” Brondello tells WSLAM. “She found a niche in Seattle and just grew her game, became a better outside shooter, but also defensively.”

But upon signing a new two-year deal in Washington with the Mystics in 2021, Clark, the person who’s always played with so much toughness, was suddenly afraid. Afraid that she’d fail in a new environment after spending nine seasons in Seattle and winning two championships with the Storm. Once again she had to find her niche. Where would she belong, not only on this Mystics roster, but in the city, the District of Change? And how would a serious lisfranc injury to her right foot impact who and what she desired to be in the next phase of her career?

When Clark signed with the Mystics during the W’s free agency period in early February 2021, the team sold her on an offer she couldn’t refuse. Washington could offer her an opportunity to become an even more complete and versatile player along with a dynamic city that would give her countless opportunities to grow off the court. She had the chance to discover if cooking could become a professional path for her after her playing career. She also had a chance to participate in philanthropic- and social justice-related activities such as interacting with and mentoring the young people in the DC community.

For the Mystics, after coming off an underwhelming and challenging Wubble season following their 2019 championship, signing Clark signaled that Washington was confident in their position to be competing for a championship right now.

“It was kind of a no-brainer to go after her,” Eric Thibault, the Mystics Associate Head Coach says. “We just thought she was a great fit for our group. She gave us another elite perimeter defender and was kind of a seamless fit offensively, and had been on a team that played similarly to us. So we didn’t think there would be much adjustment time for her working in.”

Around two months later, Clark injured her foot while playing in Lyon, France and learned she’d need surgery, sidelining her for the entire 2021 WNBA season. Clark, a self-proclaimed creature of habit, had to adjust to even more: not just a new team and a new city but now her first serious injury playing professional basketball.

An intrinsic quality of Clark is her willingness to give to others. She’s the friend, the sister, the aunt and the player who always checks in on those around her. Her friend and former Storm teammate Sami Whitcomb expressed that Clark has checked in with her multiple times so far during this W season. Clearly Clark shows up, but leading up to surgery, she wasn’t used to having to be the person who asks for help. She thought she was a burden to her closest friends and family, assuming that her best friend who’s a stay-at-home mom with a toddler wouldn’t be able to keep her company following her surgery. It was a struggle for Clark to give the people who mean the most to her the opportunity to be there for her.

But following surgery, when she had to begin recovery and rehabilitation and introduce herself to the Mystics team she couldn’t play with in 2021, she was at a crossroads. And she was without the game she loved that would be the vehicle she needed to get to know the new players around her.

“I essentially lost my support system,” she tells WSLAM.  “For so long for so many seasons, I’ve been around these other women, this other organization and I knew, like, we knew one another and so it’s in a way like coming here, I didn’t have that anymore. So it’s all new. I had to relearn that to regain that trust with new people. And so yeah, it gave me a chance to be able to feel supported through a tough time.”

Meanwhile, the Mystics were dealing with the most tumultuous season head coach and general manager Mike Thibault had ever been a part of during his entire coaching career. Elena Delle Donne was limited to three games all season and the team never recorded a clean injury report. Players were in and out with illness and injury as the team struggled to attain consistency. How would Clark manage the emotions of her own recovery along with the impulses she had to pour into her team? The giver was inclined to give.

At first she tried to offer whatever words of wisdom she could to the Mystics. Her leadership and communication skills were also reasons the front office was so attracted to sign her in the offseason. While at first she wanted to think about another situation aside from her own, the issues her team had began to overwhelm and she had to take a step back. She had to make a choice and was selective about how and who she’d provide her counsel to. Clark put her foot on the brake and allowed her teammates to approach her when they wanted or needed something. Younger guards Ariel Atkins and Shatori Walker-Kimbrough would come over to her apartment to watch film and pick Clark’s brain on defensive strategies and player tendencies.

But following the season, one where the Mystics didn’t make the playoffs for the first time since 2016, Clark was now mostly alone in DC. During the rest of her 2021 calendar year, she began to deal with a wave of depression, working through depressive episodes that slowed her down when she had no one to give her attention to. It didn’t help that her rehab wasn’t linear. She began to shame herself for not accomplishing the initial goals she set. She feared that she was failing in all aspects of her life.

“A lot of time, whether it’s like a to-do list or whatever, it’s like, Oh, if I don’t do the to-do list I failed for the day,” she says. “And it eats away at me. Or if I need to clean up my apartment and get everything done, it weighs on me. And so I had to really learn how to be like, It’s OK that you didn’t get to your bedroom today. You can do it tomorrow. It’s OK that you didn’t feel good enough to be able to do your calf raises today. It’s OK.”

Once she got past the heart of her depression at the top of the new year, it was full speed ahead toward training camp. She, Eric Thibault and her physical therapist coordinated on how Clark would approach her developmental skill work such as ballhandling and adding some shiftiness to her game in conjunction with making sure they weren’t pushing her foot in the wrong direction. The key was executing the plan they put together cautiously. If something didn’t feel strong or comfortable, Thibault didn’t want to push it.

“So I’m sure she would have liked to have been back to full strength a little bit earlier,” Thibault says. “But the most important thing was having her be fully healthy, not having any major setbacks. I think we did a pretty good job integrating all of the different parts of her rehab.”

While she continued rehabbing and growing her game, she began to delve into the interests that brought her to DC. A personal imperative in signing with the Mystics was to make sure she established her portfolio off the court. As a reserved person, she’s had to put herself out there and take her ideas and put them into actual action.

Since February, she’s been working on figuring out a way to educate young people on the books that have been banned across the country. She wants young people to have a space to have dialogues that inform them on the mistakes that have been made in the US, so they can be encouraged to have empathy for those who are different. She also earned her first contract with adidas.

“I’m really, really proud of myself for not letting fear have the reins anymore,” she says.

And fear is loosening up on the reins on the court, too. She began the season a bit hesitant while trying to find her way after not playing in a live pro game in over a year. And then shortly after she played a major role in stopping Atlanta Dream rookie sensation Rhyne Howard, Clark got Covid. She had finally got into a rhythm and was hit with yet another bump in the road.

But on June 8 against the Chicago Sky, she felt like herself again after passing through health and safety protocols. She showed off some new ball handling skills in her 18-point, 7-9 shooting performance in her team’s 84-82 win. She’s beginning to find her way in Washington, and her teammates whom she didn’t know that well when this journey began are really happy that she chose DC.

“Yeah, I’m just really thankful that she decided to come here,” Atkins said about Clark following the win. “AC is a good human, too, and those are the type of people we want in our locker room. She makes those cupcakes on our birthdays.”

How did she find her new niche? By being herself.

The post The Art of Growth: How Alysha Clark Persevered Through it All to Make Her Return to the Mystics appeared first on SLAM.